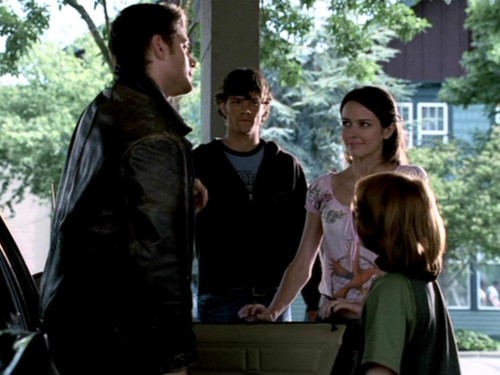 I approached this third episode of Supernatural feeling a little ambivalent about the show. The pilot had been amazing and almost too creepy. The second episode had been a bit of a dud. But for most shows, the third episode plays a pivotal role – after episode one establishes the premise of the show, and episode two establishes the “formula” of a normal episode, episode three usually gives the best picture of the rest of the season, and sometimes the rest of the entire show.

(Hmm, just to prove that theory to myself I looked up the third episode of some of my favorite shows – so many awesomely fun moments – from John Casey throwing a microwave at a bad guy in Chuck to Spike making fun of Angel to Beckett grabbing Castle’s ear when he tries to overhear her phone conversation.)

So after the “previously on” section played (I seriously hope they don’t show clips of the pilot in front of every episode this season), the episode opened with a victim’s last moments while the credits blinked up on the screen. I saw one name and immediately got excited – this episode guest starred Amy Acker!

Best known as Fred from Angel, she’s also in Dollhouse and even a couple episodes of No Ordinary Family. I think it was brilliant to cast Amy so early in the show – Angel had only been off for a year, and Supernatural was aimed at similar viewers. And the show was nice enough to make her an integral part of the episode – not just a cameo walk-on.

This episode did a great job of making ordinary moments creepy, and the Winchester brothers played off each other much better. They actually seem like a team. The dialogue steps up a notch, too, with Acker delivering a fun zinger:

Must be hard with your sense of direction – never being able to find your way to a decent pickup line.

The brothers introduce themselves as Agents Ford and Hamill, a Star Wars reference it took me a bit to catch. And Dean shows a bit of his vulnerable side, but I’m still not feeling why thousands of fans are gaga over these characters. I’m hoping that will become more apparent soon, as the brothers are this show’s only constant so far.

Yet in all, I loved this episode, and am definitely looking forward to more Supernatural!