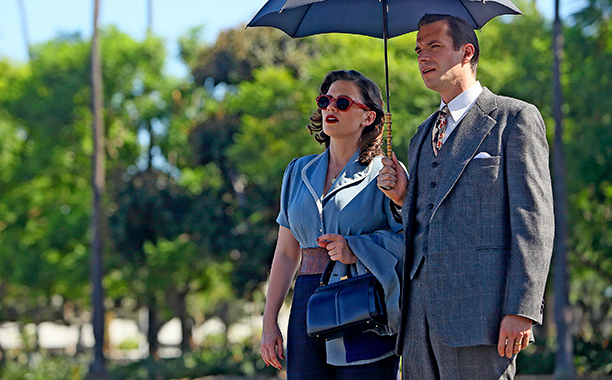 Last May I did a round-up of the year in broadcast TV, and I think I’m going to make that an annual tradition. One change from last year – I now have less than 600 episodes on my to-watch list, compared to last year’s 900+!

So the innovative British guy is out, and ABC has a new president, one who’s besties with Shonda Rhimes (I don’t watch any of her shows, so you can guess how I feel about that). New gal cleaned house, canceling several of my favorite shows in the process, including Agent Carter (pictured above), Castle (which was sort of for the best, since it would have had to continue without Beckett), and Galavant (which at least ended well). ABC used to be my most-watched network, and now it is my least, with only 2 shows I watch returning next year: Agents of SHIELD and Once Upon a Time (which, like last year, sits mostly unwatched until I catch up during breaks). None of ABC’s nine new shows sounded especially appealing, though after watching the trailers I may try out Designated Survivor and the more boring-sounding of the three time-travel shows launching this year, Time After Time. I was thinking of giving Hayley Atwell’s Conviction a chance, but the promo made me think it’s not really my cup of tea.

The Eye Network still has plenty of veteran shows I will keep watching until the end, even as they become more annoying to watch as the only broadcast network who doesn’t put their shows on Hulu. I have the no-commercials option on Hulu Plus, so watching CBS shows with all commercials live or on demand feels like a waste of time. I’d sign up for CBS All Access in a heartbeat if it got rid of commercials, but unfortunately, it doesn’t. I tried out the excellent Life in Pieces (renewed) and the doomed-to-fail Angel from Hell (canceled) this year. Person of Interest is also ending this summer. In addition to Life in Pieces, next year I’ll watch returning comedies The Big Bang Theory and just-renewed The Odd Couple. For dramas, I’m still watching NCIS (how I will miss DiNozzo!), NCIS: Los Angeles, Elementary, and Scorpion. Out of their new shows, the only drama I plan to try out is Michael Weatherly’s Bull (the premise is meh, but the 4-minute trailer looks awesome), but I will probably at least sample all of their new comedies.

Fox actually had a cool screening opportunity in my area for 3 of their new shows – Grandfathered, The Grinder, and Scream Queens. Of the 3, I only liked Grandfathered, but only Scream Queens was renewed. I also really liked Cooper Barrett’s Guide to Surviving Life, which was canceled. Sleepy Hollow was a surprise renewal – the show will never be as good as its first season, and I still have a few episodes waiting to be watched, but I’ll keep watching as long as Tom Mison plays Ichabod Crane. I also will watch the final season of Bones, and of course awesome comedies New Girl and Brooklyn Nine-Nine. I haven’t watched any more of The Last Man on Earth, but I may try out the show again if I’m running out of comedies over the summer. Fox’s new fall shows aren’t particularly compelling, but at midseason I may try out The Mick and APB since promos look interesting. Midseason time-travel comedy, Making History (starring Adam Pally and Leighton Meester), is the one new Fox show that earned an immediate spot on my to-watch list (which means, of course, that Fox will cancel it).

2 new shows watched (2 others tried), 2 of my shows canceled (both new), 4 of my shows returning

I noted last year that NBC had only one returning show I would be watching – Grimm. I tried out two of their new shows this year, Blindspot and Superstore, both of which I enjoyed immensely and both of which were renewed, along with Grimm. So now I will have 3 NBC shows to watch next fall, plus I will definitely check out their 3 new shows, Timeless (time travel and Matt Lanter), The Good Place (Kristen Bell), and This is Us (Mandy Moore and Milo Ventimiglia). All have pretty decent spots on the fall schedule, so I’m hopeful they’ll stick around for at least a season, and I’ve enjoyed a lot of the showrunners’ previous shows, so I’m hopeful the quality will be good. Plus, NBC has a number of midseason shows I want to check out, especially the DC comics-set workplace comedy Powerless, starring Vanessa Hudgens, Danny Pudi, and Alan Tudyk. Excited that NBC seems to be turning things around.

For the second year in a row, the CW renewed all their shows (spring show Containment, now canceled, had yet to premiere, and summer show Beauty and the Beast had already been announced as final season). I tried out and liked new shows Crazy Ex-Girlfriend and Legends of Tomorrow. I’ll still be watching Arrow, The Flash, Jane the Virgin, The Vampire Diaries, The Originals, and iZombie (and Supernatural if we ever catch up – on season 6 now). I’ll probably try out their 3 new shows, and while I like the premise for No Tomorrow more, I liked the trailer more for Frequency. Though if Riverdale premieres in the spring, there’s not much hope for it (since the CW seems to cancel one spring show every year – Containment in 2016, The Messengers in 2015, Star-Crossed in 2014, Cult in 2013, etc.).

2 new shows watched, 0 of my shows canceled, 8 (9 if counting Supernatural) of my shows returning

As much as I hate losing shows, it’s time for some long-running favorites to come to an end. Castle ended this year; Bones is entering its final season. NCIS: Los Angeles has lost viewers away from its parent show, and is now moving to Sundays. I wouldn’t be surprised if it or Elementary gets canceled next year, but if CBS’s new shows bomb, they’ll likely stick around. On the speculative side, The Vampire Diaries is showing its age, and if more actors are bailing, it should end. I also don’t see Once Upon a Time lasting much longer, though I do like how they’ve been exploring different realms every half season to keep things interesting. Supernatural will live as long as Jared and Jensen want to keep doing it, and the same with the cast of The Big Bang Theory.

I don’t think the CW will renew all their fall shows again this year. There’s just not space, and I’m pretty sure one of the newbies will go. And I’m guessing at least one returning show will be moved to summer.

New fall shows that I think will be renewed: Bull (everyone who liked Michael Weatherly on NCIS will keep watching his new show airing right after NCIS), Designated Survivor, This is Us, Speechless, The Great Indoors, and Timeless.