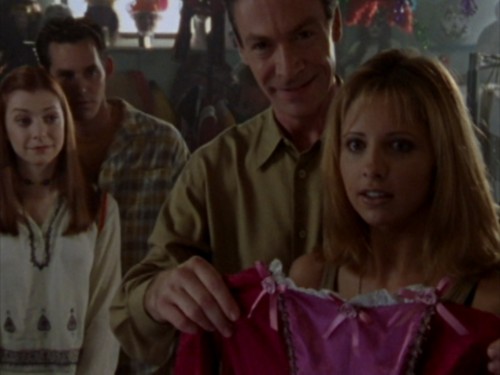 It’s my third time watching this episode, and while the simplistic plot failed to capture my attention during this viewing, I’m in awe how much the writers packed into a single episode.

First, we get a new reoccurring villain and our first hint of Giles’ past. In his initial moments on screen, Ethan Rayne seems to be nothing more than an ordinary store owner, with a kindhearted streak to persuade Buffy to get the Halloween costume she really wants. Instead, he’s into dark arts with a gift for creating chaos. In this episode, it’s having people turn into whatever they dress up as for Halloween.

That chaos is a perfect opportunity for Spike, who has been having his vampire minions videotape Buffy so he can study her. (And it’s kind of fun watching the minion mess with the dying camcorder.) This explains why we haven’t seen Spike and Drusilla at all for past two episodes. Having them as secondary villains in this episode is a good setup for the rest of the season. And Drusilla’s insane ramblings are hilarious.

Drusilla:  Do you know what I miss? Leeches.

I was surprised that Cordelia didn’t know Angel was a vampire until this episode, so while rewatching up until this point I took note of their earlier interactions – nope, no game face slip-ups or conversational allusions (anything said was too vague for Cordelia to come to that conclusion). Having now seen all 5 seasons of Angel, I was curious to see if there was any hints about their future relationship. Even though Cordy and Angel do share a laugh in this episode, it’s far easier to see foreshadowings of Spike and Buffy’s future.

Spike:  (chuckles) She’s tricky. Baby likes to play. You see that? The way she stakes him with that thing? That’s what’s called resourceful. Rewind it again.

And all of the core four have story arcs in this episode that will influence the future:

Giles is hiding his past, dealing with his evil counterpart (who will return), and showing that he does have some fighting skills of his own.

Xander goes from having Buffy rescue and embarrass him to rescuing her (and getting to beat up the guy who threatened him). Plus all his soldier knowledge will come in handy later on.

Xander:  A black eye heals, Buffy, but cowardice has an unlimited shelf life. Oh, thanks! Thanks a lot for *your* help.
Buffy:  I think I just violated the guy code big time.
Willow:  Poor Xander. Boys are so fragile.

Buffy:  Hey, look, Xander… I’m… really sorry about this morning.
Xander:  Do you mind, Buffy? I’m trying to repress.
Buffy:  Okay, then I promise, from now on I’ll let you get pummeled.
Xander:  Thank you. Okay, y’know, actually I think I could’ve t…
(Buffy is distracted and walks away.)
Xander:  Hello! That was our touching reconciliation moment there!

Buffy doesn’t quite pull off the damsel-in-distress role (can’t imagine what Sarah Michelle Gellar would have been like as Cordelia), but she makes a good effort and really shines in a few places (including her scream when she sees that Angel is a vampire). The uncertainty in her relationship with Angel finally seems to settle as the episode ends – which is the first time that they really seem to be boyfriend and girlfriend.

I love how Xander acts with the kids he takes trick-or-treating:

Xander:  Okay, on sleazing extra candy: tears are key. Tears will normally get you the double-bagger. You can also try the old ‘you missed me’ routine, but it’s risky. Only go there for chocolate. Understood? Okay, troops. Let’s move out.

If the Buffy comics go on long enough, I think it’s going to be fun seeing Xander with kids of his own. I also love Willow and Buffy trying to research Angel’s past:

Willow:  True. It’s too bad we can’t sneak a look at the Watcher diaries and read up on Angel. I’m sure it’s full of fun facts to know and tell.
Buffy:  Yeah. It’s too bad. That stuff is private.
Willow:  Also Giles keeps them in his office. In his personal files.
Buffy:  Most importantly, it would be wrong

I love Giles’ reaction when ghost Willow walks through the wall in the library. Though the episode does have a major goof when Giles and Willow confront Ethan in his shop. Giles tells Willow to leave, and we see her move the curtain as she turns, then we hear her footsteps and the shop door opening and closing as she walks out.