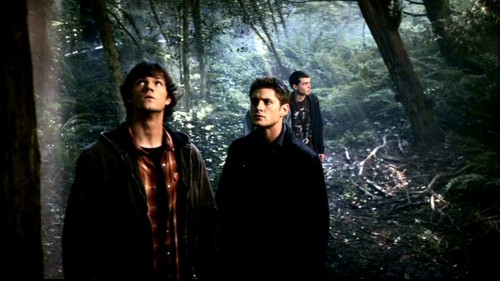 So I finally got around to the second episode of Supernatural, and I wasn’t all that impressed. I’m still not feeling Dean and Sam as a team, and since so far they’re the only core characters, a lot hinges on the two of them and how they interact.

This episode doesn’t really have anything to distinguish it from any other monster-hunting show. Unwary campers are caught by an unseen creature, our two heroes come in and investigate, putting themselves in danger, and finally are able to defeat the creature and save the day. There’s the pretty girl to impress, and the stubborn guy who doesn’t listen and gets himself killed.

Aside from a decent soundtrack and a pre-Glee appearance of Cory Monteith, there really isn’t much to say about this episode. I’m not giving up on this show yet, since there has to be a reason it has such a cult following. I just hope I won’t have to get through all of season one before that becomes apparent. I’d put this episode on par with Smallville, to which I still haven’t returned.

I think the main thing I’m missing is humor. This show takes itself way too seriously. I think Joss Whedon has spoiled me. And the dialogue seems rather humdrum, too. I found myself wanting the brothers to find their dad just so the show could have a new character who might change dynamics.

The one part I enjoyed about this episode was the startling end to the dream sequence. It gives me a little hope for future episodes.