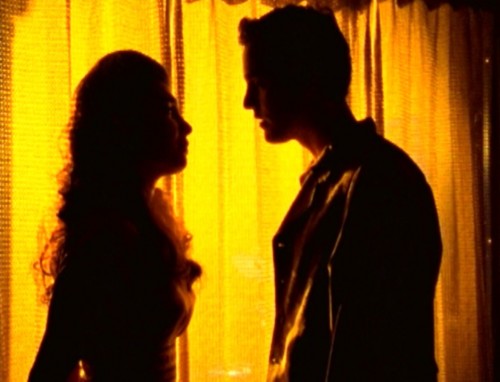 Poor Xander. He always seems to fall for the wrong girls. This time, though, it’s hard to blame him. The mummy had everyone fooled that she was an innocent, sweet exchange student. And except for mummifying people to stay alive, that’s basically what she was.

One of the highlights of this episode for me was the introduction of Oz (Seth Green). I love how he notices Willow in her Eskimo garb, at a moment when she’s doing her best to be happy for Xander even while her heart is breaking. I wonder how the show would have been different if Oz stayed through season 4 and beyond. The episode also has the first appearance of Jonathan, who will affect events into season 7. I’m mostly familiar with Danny Strong as Doyle on Gilmore Girls. Looked up a bit of trivia on him – he tried out for the part of Xander, and also went to college (and was in school stage productions) with the George Hertzberg (Adam in season 4) and J. August Richards (Gunn on Angel).

Other than the introduction of two new characters and a sympathetic villain, there isn’t much remarkable about this episode. Even most of the dialogue seems to lack its usual sparkle, though there’s still a few good bits:

Xander:  What he lacks in smarts he makes up in lack of smarts.
Willow:  You just don’t like him ’cause of that time he beat you up every day for five years.

Buffy:  Oh! I know this one! Slaying entails certain sacrifices, blah, blah, bity blah, I’m so stuffy, give me a scone.

Oh, and since I keep bashing the Buffy the Vampire Slayer movie, I figured should at least finish it. I’d only made it through a half hour in the past. And now that I’ve seen the whole thing, I can say with authority – it’s awful. The only thing I liked about it was the actor who played Pike.