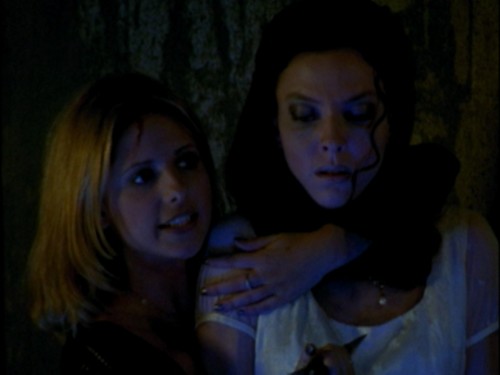 Joss Whedon recently gave the reason why the seventh episode of his shows’ seasons were often so pivotal and powerful – that was usually the first episode he got to write, and he “saved the best stuff” for himself.

“Lie to Me” is no exception. It’s where the season takes a darker, more serious turn. We find out Drusilla and Angel’s history and the reason why she’s insane. Buffy learns of her existence for the first time.

Buffy’s past also comes calling in the form of her old friend (and grade school crush) Ford. Xander, of course, is immediately jealous, but it’s Angel who senses that something’s off about him, and in a surprising move, turns to Willow.

Angel:  I guess I need help.
Willow:  Help? You mean like on homework? No, ’cause you’re old and you already know stuff.

And you have to love a show that’s not afraid to make fun of itself:

A key aspect to the story is the wannabe vampire society. (Now they’d just be Twilight fans. By the way, I love that the Spike comics make fun of Twilight.) It’s the first appearance of the girl who will later be known as Anne on Angel. I find it somewhat humorous that a group of people so into vampires doesn’t even notice when one’s in their midst.

There are still plenty of funny moments even though this episode is more somber than previous ones (something I miss in many episodes of Angel). I love how Xander keeps saying “You’re not wrong” when Ford says things that hint at Angel being a vampire. And I love how Willow is terrible at keeping secrets and how her mind goes off on fun tangents:

Buffy:  Okay, Will, fess up.
Willow:  What?
Buffy:  Are you drinking coffee again? ‘Cause we’ve talked about this.

Willow:  Okay, but do they really stick out?
Xander:  What?
Willow:  Sore thumbs. Do they stick out? I mean, have you ever seen a thumb and gone, ‘Wow! That baby is sore!’
Xander:  You have too many thoughts.

Cordelia only makes a brief appearance in this episode (to ignorantly identify with Marie Antoinette), and Jenny is only there to give Giles a surprise date:

Buffy:  Sorry to beep you guys in the middle of… stuff, but it seemed really weird.
Giles:  No, you did the right thing. Absolutely.
Jenny:  You hated it that much?
Giles:  No! But, but, uh, vampires on campus is, could have implications. Very, very grave…
Jenny:  You coulda just said something.
Giles:  Uh, honestly, I, I’ve always, I’ve always been interested in, uh, monster trucks.
Buffy:  You took him to monster trucks?
Jenny:  I thought it would be a change!
Giles:  It was a change.
Jenny:  Look, we could’ve just left.
Giles:  What, and miss the nitro-burning funny cars? No, couldn’t have that.

This episode nicely sets up “What’s My Line,” with the stealing of the book and Drusilla playing a larger role.

Spike:  The bird’s dead, Dru. You left it in a cage, and you didn’t feed it, and now it’s all dead, just like the last one.

Ford:  Oh, c’mon! Say it! It’s no fun if you don’t say it.
Spike:  What? Oh. (rolls his eyes) You’ve got thirty seconds to convince me not to kill you.
Ford:  Yes! See, this is the best! I wanna be like you. A vampire.
Spike:  I’ve known you for two minutes, and I can’t stand you. I don’t really feature you livin’ forever. (to Drusilla) Can I eat him now, love?

I find it interesting that Spike kept his promise to turn Ford into a vampire, even though Buffy ruined all their plans. Was he that honorable, or did he do it to get back at Buffy? Either way, it nicely sets up the closing scene, as Buffy and Giles talk while waiting for Ford to emerge. It’s one of my favorite conversations of the show:

Buffy:  Nothing’s ever simple anymore. I’m constantly trying to work it out. Who to love or hate. Who to trust. It’s just, like, the more I know, the more confused I get.
Giles:  I believe that’s called growing up.
Buffy:  I’d like to stop then, okay?
Giles:  I know the feeling.
Buffy:  Does it ever get easy?
Giles:  You mean life?
Buffy:  Yeah. Does it get easy?
Giles:  What do you want me to say?
Buffy:  Lie to me.
Giles:  Yes, it’s terribly simple. The good guys are always stalwart and true, the bad guys are easily distinguished by their pointy horns or black hats, and we always defeat them and save the day. No one ever dies, and everybody lives happily ever after.

One thought on “Buffy the Vampire Slayer – Lie to Me”