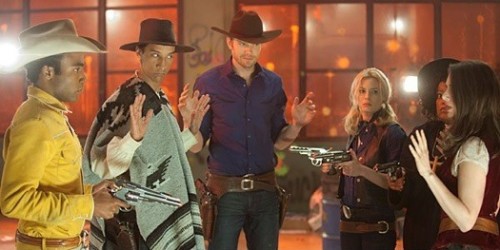 Community didn’t do that great of a job winning me over with the show’s initial promos. I remember being bored and confused with the teaser. Maybe it was a better hook for those familiar with Joel McHale.

I don’t remember what pushed me to watch the first episode – perhaps a later, better ad. But I liked the show enough to keep watching, and eventually enjoyed it so much that I pre-ordered the first season months in advance.

I love how each of the characters has their own type of humor, and how different characters take turns pairing up in each episode so the dynamics are always fresh. Of course, my favorite pair is Abed and Troy. I love their 30 second clips at the end of most episodes – and those make a great introduction for people new to the show.

The show’s second season wasn’t quite as consistently good as the first, but the season’s best episodes really shined – and none more than the two-part season finale.

I was a bit skeptical when I heard they were doing another paintball episode. Hadn’t they already covered that well enough in the first season? I was afraid it would simply be a rehash of “Modern Warfare,” but, boy, was I wrong!

The first of the connected episodes, “A Fistful of Paintballs,” put an Old West spin on the slinging of color. The gang is dressed up for a Western-themed end-of-the-year picnic (with free ice cream), when a paintball competition, complete with six-shooters, is announced. The prize – $100,000 – sends the school into a frenzy. Add in a tale of alliances and betrayal, and epicness ensues.

The second episode, “For Few Paintballs More,” changes things up when hostile paintball assassins invade the school wearing white gear and masks. Yes, they look like Stormtroopers. Add in a Star Wars-esque rolling intro, tiny robotic paint launchers on wheels zipping through the halls, and Abed acting like Han Solo (complete with vest), and you have the best mashup of space opera and western since Firefly. (I’ll have to find out if Cowboys & Aliens tops it later.)

Community is just about tied with The Big Bang Theory for my favorite comedy show, and I really hate that they both air at the same time. So I won’t fault you if you don’t watch this on Thursdays this fall – but be sure to catch it online later!