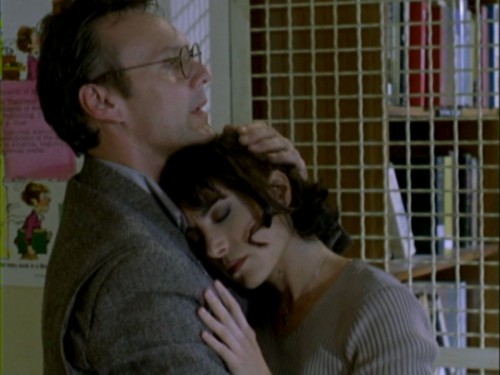 Aside from the “so over-the-top it’s corny” music at the beginning of this episode, “The Dark Age” is pretty much perfect. We know the scared guy walking in the night isn’t just an ordinary victim as soon as he asks for Giles (by the way, whatever was in his metal briefcase?). We know the creepy dead woman isn’t just another zombie as soon as she dissolves into a blue puddle.

And of course Giles’ past comes back to haunt him at the worst possible moment – just when things are going well with Jenny. Was this the start of Joss Whedon’s mean streak? I feel so sad for Giles at the end of this episode, but at least Buffy knows how to lessen his pain a little:

Buffy:  And you know what? I have just the perfect music. Go on, say it. You know you want to.
Giles:  It’s not music, it’s just meaningless sounds.
Buffy:  There. Feel better?
Giles:  Yes. Thanks.

I’m glad they finally did a Giles episode. Up until this point, he’s mostly been the smart one who gets made fun of:

Xander:  Giles lived for school. He’s actually still bitter that there are only twelve grades.
Buffy:  He probably sat in math class thinking, ‘There should be more math. This could be mathier.’
Willow:  C’mon, you don’t think he ever got restless as a kid?
Buffy:  Are you kidding? His diapers were tweed.

Of course, they only pick on him because they love him. Even Jenny gets in on it:

Jenny:  Yeah, y’know how you have to dog-ear your favorite pages so you can go back to them?
Giles:  Uh, uh, uh, what?
Jenny:  Well, I mean, I practically had to fold back every single page. So finally I just started underlining all the pages I really wanted to discuss.
Giles:  U-u-underlined…?
Jenny:  But then, of course, I spilled coffee all over it, I can’t even read it…
Giles:  It’s a first edition!
Jenny:  I’m lying, Rupert. The book’s fine. I just love to see you squirm.

And Willow gets to go into teacher mode and yell at people again (is it any wonder Alyson Hannigan is a teacher on How I Met Your Mother?). This time it’s Xander and Cordelia, and for a moment, they look like they might kiss (though that’s not far away).

The pain that Giles feels because a demon has taken over the woman he loves seems to foreshadow the story of another Watcher, another innocent woman, and another demon, in another show. (Though that time Angel can’t save the day without terrible cost.) While this episode pales in comparison to “A Hole in the World,” you have to take into consideration that this is only the twentieth episode of Buffy, and Jenny survives. (“Passion” would be a better episode to compare “A Hole in the World” to.)

I think that Ethan Rayne makes almost as good of a villain as Spike (perhaps British accents are clouding my judgment? I’ve already determined that Mark Strong is far scarier with one). He’s a genius at out-of-the-box evil plans, like tattooing someone else to throw off a demon. And when a character introduced himself as Ethan Rayne on a recent episode of Burn Notice, I felt a tingle up my spine. Despite only having 4 episodes in Buffy, he makes it into the video game and the season 8 comics.

Does your favorite villain have an accent?