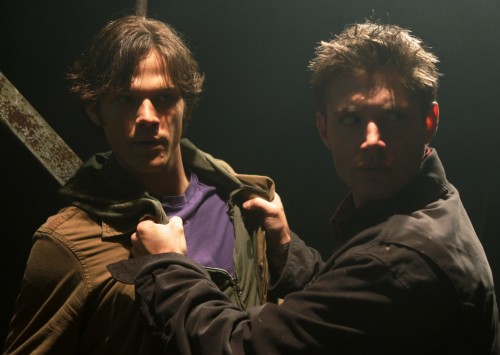 It was only recently that I’d even heard of the show Supernatural. It popped up a few times on TV blogs and articles, and I gathered that it had a strong fan base. Without probing too deeply (trying to avoid spoilers!), I learned that two brothers, trained by their dad after the death of their mom, hunt all sorts of supernatural baddies.

The pilot introduces the Winchester brothers, Dean and Sam (played by Jared Padalecki, who I knew as Dean from Gilmore Girls, which made things a bit confusing). The entire episode was quite creepy, something I wasn’t expecting. Most of the speculative shows I watch involve vampires or superheroes, and fighting them means physical battles. As such, they tend to be more scary/suspenseful than creepy, but Supernatural’s pilot ranks right up there with the handful of episodes that were creepy (Buffy the Vampire Slayer’s “Hush” and Angel’s “Room w/a Vu” come to mind).

The pilot featured Life and Fairly Legal’s Sarah Shahi. The acting and effects were above par, and it contained enough of a hook to make me want to watch the second episode. The only thing that didn’t ring true was Dean’s comment to Sam that they made a great team. Their teamwork wasn’t impressive at all in this episode – they seemed to just stumble onto things individually. (A bunch of shows come to mind that have much better teamwork in the pilot episode that ultimately brings the characters together to form the show – Leverage, Bones, White Collar, Burn Notice . . .) But I’m guessing this improves with future episodes. I’m looking forward to what a regular episode will bring.

One thought on “Supernatural – Pilot”