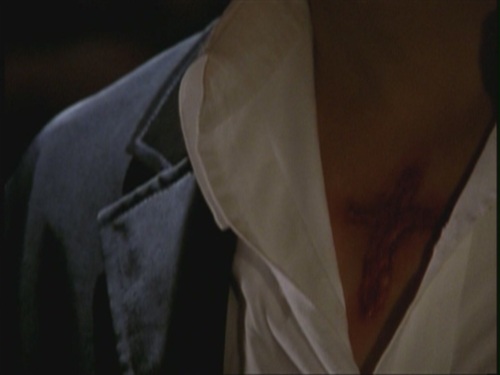 This is THE pivotal episode of Buffy the Vampire Slayer’s season one. While it’s almost impossible now to start watching the show without knowing who Angel is, I can’t imagine the shock viewers felt when the episode first aired and they discovered Angel was a vampire.

Having watched season one of Angel first and read part of his character biography online, the episode held few surprises for me. It was nice to see Angel finally do some fighting. I also enjoyed the hidden backstory in exchanges like this:

Buffy:  Well, what does your family think of your career choice?
Angel:  They’re dead.
Buffy:  Was it vampires?
Angel:  I-it was.

Darla in this season doesn’t seem to quite mesh with her personality in flashbacks and later on Angel. But the idea of her bringing guns to the fight fit perfectly. And the whole thing with Joyce was kind of interesting.

Willow:  Wow! And it is kinda novel how he’ll stay young and handsome forever, although you’ll still get wrinkly and die, and… Oh, and what about the children? (Buffy looks at her) I’ll be quiet now.

I’ve seen a few not-so-shining reviews of this episode, but for me, it’s one of my favorites in season one. Not only do we get the introduction of Jenny (and the added dimension her character brings to Giles), but it’s chock-full of great dialogue:

Ms. Calendar:  Oh, I know, our ways are strange to you, but soon you will join us in the 20th century. With three whole years to spare!
Giles:  Ms. Calendar, I’m sure your computer science class is fascinating, but I happen to believe that one can survive in modern society without being a slave to the, um, idiot box.
Ms. Calendar:  That’s TV. The idiot box is TV. This (indicates a computer) is the *good* box!

I couldn’t help but think of the season four episode where the gang invades Giles’ house and Xander discovers his dark secret: “Whoa, Giles has a TV. Everybody, Giles has a TV! He’s shallow like us.”

Giles:  I’m just gonna stay and clean up a little. I’ll be back in the middle ages.
Ms. Calendar:  Did you ever leave?

Xander:  Or who he really is. I mean, sure he says he’s a high school student, but I can say I’m a high school student.
Buffy:  You are.
Xander:  Okay, but I can also say that I’m an elderly Dutch woman. Get me? I mean, who’s to say I’m not if I’m in the elderly Dutch chat room?
Buffy:  I get your point. Oh, this guy could be anybody. He could be weird, or crazy, or old, or… He could be a circus freak. He’s probably a circus freak!
Xander:  Yeah. I mean, we read about it all the time. Y’know, people meet on the ‘Net, they talk, they get together, have dinner, a show, horrible axe murder.
Buffy:  Willow axe-murdered by a circus freak…

The demon-in-the-internet aspect is different from typical episodes, which keeps the story interesting even though there are a few logic leaps (like how Buffy was able to follow Dave’s car on foot). The monks at the beginning of the episode reminded me of the ones who hide the key in season five. And it’s interesting to note that Willow becomes interested in robotics later on.

Plus Xander gets to punch someone. And Willow stands up for herself and hits Moloch with a fire extinguisher.