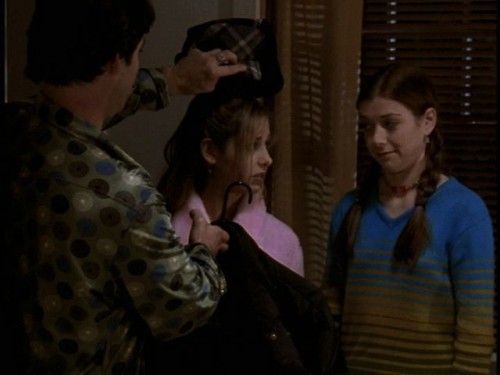 “Never Kill a Boy on the First Date”

This episode focuses on Buffy’s struggle to balance her “normal” life and her slaying, particularly in relation to dating sensitive guy Owen. While it’s a decent episode, it’s not really remarkable. We get the first “killed by fire” vamp, and the Anointed One comes on the scene. His identity is an interesting final twist, but I’m sure many viewers agree with Spike’s nickname for him: the Annoying One. He gets far too much screen time for the tiny role he eventually plays in the story.

Buffy:  See, this is a school, and we have students, and they check out books, and then they learn things.
Giles:  I was beginning to suspect that was a myth.

Giles:  Alright, I’ll just jump in my time machine, go back to the twelfth century and ask the vampires to postpone their ancient prophecy for a few days while you take in dinner and a show.
Buffy:  Okay, at this point you’re abusing sarcasm.

I enjoyed this episode just as much the second time. It’s one of the standout episodes of the first season, if only to see Xander acting against type (parts of it reminded me of the Angel episode, “Billy”). The four “cool” kids seemed out of place right from the start, and it’s interesting that this is the only episode they appear in (is it weird that their demeanor and the way that the two guys and two girls hung out together made me thing of the Cullens?). They did look a little familiar, so I looked up the actors. One plays Ben Mercer on Covert Affairs, and another is in episodes of four crime dramas I watch.

And of course since Principal Flutie has one moment of connection with Buffy, you know something’s going to happen to him. Somehow I don’t think “eaten by hyena-possessed teenagers” was the way he wanted to go.

Willow:  Why couldn’t Xander be possessed by a puppy or, or some ducks?

This is the first episode where Buffy admits she’s attracted to Angel – she seems to have quickly forgotten Owen. (I wonder if episodes 4 and 5 were supposed to be in reverse order?) Even Xander knows she likes Angel – it’s as if Owen is a distant memory. Willow reveals even more how deep of crush she has on Xander (and I could only think of Oz while she was watching over Xander locked in the book cage).