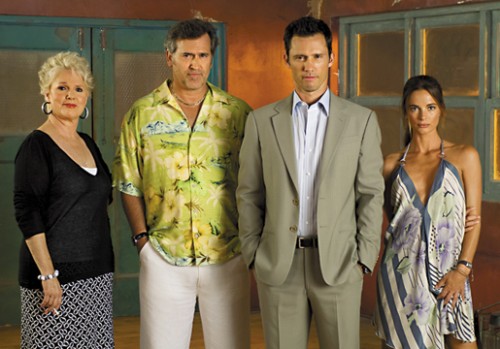 I think somehow it’s hard-wired into the American brain that summer=explosions. (Personally, I blame Fourth of July fireworks.) Most of the summer movie blockbusters have explosive elements, and that reverberates on the small screen as well.

Summer is also for relaxing and escape, and summer TV shows reflect this. While there’s still some drama and serious moments, summer shows tend to lean more heavily on comedy and action than their regular season counterparts.

Burn Notice fits right in. With an average of more than one explosion per episode, car chases, and flying bullets, the show seems made for the season.

Jeffrey Donovan stars as Michael Westen, a burned spy who makes a living as a Robin-Hood-for-hire in Miami. Along with a brain full of MacGyver-like spy tricks (who knew basic supplies from a hardware store could be so useful – and deadly?), a close posse of friends and family, and incredible luck surviving near-fatal attacks, Michael hits bad guys hard while trying to figure out why he was burned.

In the season five premiere (spoilers ahead), Michael is working as a consultant for the CIA and tracking down everyone in the organization that burned him. As the episode starts, he’s down to the last two. Joining him on this quest is his new partner Max and his old boss, Reese (played by Dylan Baker, who I know best as William Cross on sadly-canceled Kings).

To catch the head of the organization, Michael brings in Sam and Fiona. It was fun to see the trio in action again, but as all three of them felt the constraints of working for the CIA, it puts the whole transition of burned spy to regular spy into doubt.

Even Jesse quit the CIA to get into private security. His brief appearance on this episode left his role this season rather vague. I’m guessing he may help out when needed, like Barry has in the past. I’ll be glad if his role is kept small, as I much preferred the original trio.

But most of where the show is going this season wasn’t revealed in the first episode, which felt like it belonged with the rest of season four despite the 6-month time gap. With most of the major plot threads of the show wrapped up, I’m excited to see where Burn Notice will go next.