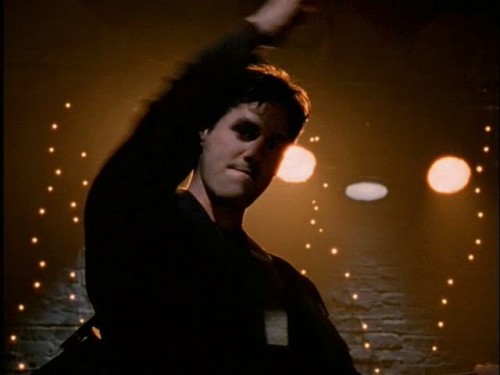 This episode bored me this time around. It did have a few good aspects, like establishing Buffy, Giles, Xander, and Willow as the core group. It’s also full of awesome Xander quotes:

I laugh in the face of danger. Then I hide until it goes away.

For I am Xander, King of cretins. May all lesser cretins bow before me.

We’re right behind you, only further back.

I don’t think the writers intended for Giles’ statement of never doing spells before to be a boldface lie, as future episodes reveal, but he did seem to be awfully good at it for a complete novice. And who knew what Amy would become?

After rewatching the last episode was somewhat yawn-worthy, I was pleasantly surprised with this one. The beginning dream/daydream sequence was fun. I’d forgotten how much Xander was crushing on Buffy in the first season. Two vamp dustings were implied but not shown – I wonder if the special effects budget all went toward the giant insect. Not that the giant insect was a great success, but at least they seemed to realize this and kept her in the shadows most of the time.

The main shortcoming to this episode was that things got overexplained and repeated, quite common for early episodes of shows until writers learn to trust their audience’s intelligence.

The episode did a great job of making you care about Dr. Gregory for the few short minutes of screen time he got. Poor Buffy. Everytime she seems to connect with someone employed by the school (other than Giles), they’re not long for the world.

But this episode is mostly about Xander. Not only do we see how his crush on Buffy is growing stronger, it’s also the first time we see him jealous of Angel. (And no, Xander, Buffy would not describe a guy as buff. Corny wordplay is more Willow’s forte.) We also learn his middle name, LaVelle.

This episode also gets the first somewhat cool vampire (other than you know who, of course, but shh – episode 7 isn’t here yet!), known simply as “Claw Guy.” He had to have been around for a while to make it into Giles’ books, and he both injured Angel and initially put up a decent fight with Buffy. His demise proved the interchangeability of stakes and fences (in the first episode, Xander’s explanation for Buffy’s stake is that she’s “building a really little fence”)

Buffy: So I’m an undead monster that can shave with my hand…How many things am I afraid of?

Giles: Um, this computer invasion that Willow’s performing on the coroner’s office, one, one assumes it is entirely legal?
Willow: Entirely!
Buffy: Of course!
Giles:  Right. Wasn’t here, didn’t see it, couldn’t have stopped you.

This episode feels like it’s at least several weeks after the last one (except for the overexplaining). Both Buffy and Giles seem to accept that Willow and Xander will be helping out, research-wise at least, with the monster fighting. Everyone seems comfortable with the fact that they’re up against more than just vampires. Even though everyone freaks out a bit, they seem to have faced more than just the events of the past three episodes.