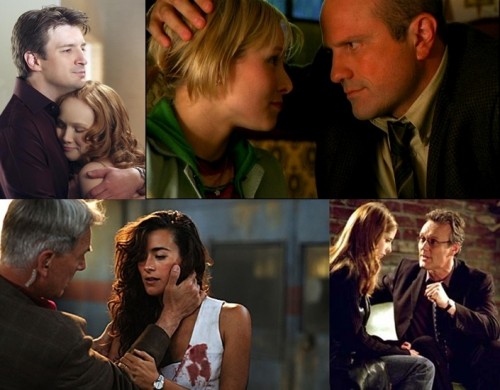 In honor of dads everywhere, this Father’s Day I want to talk about my favorite TV father and daughter relationships, both “real” and father/daughter-like.

Castle’s relationship with his daughter is one of my favorite parts of this show. I love the twist of having the daughter be the responsible one, but it’s clear that Alexis loves her father’s playful antics. One of my favorite scenes of the two of them is their laser tag battle. Another is when Castle comes out dressed like Captain Mal from Firefly:

Alexis: What exactly are you supposed to be?
Castle: Space cowboy.
Alexis: Ok, A: there are no cows in space. B: didn’t you wear that like five years ago?
Castle: So?
Alexis: So, don’t you think you should move on?
Castle: I like it.

I also love the scene where Alexis confesses to jumping the turnstile. I hope Alexis chooses a local college because I would hate for that dynamic to be missing from the show.

Not only do these two share sleuthing skills and a strong desire for justice, they know each other extremely well, and it’s evident from the first episode.

Keith: Don’t do anything on the Kane case, I’ll handle it.
Veronica: Okay.
(a few lines later)
Keith: And Veronica.
Veronica: Yes?
Keith: When you go after Jake Kane, you take backup.
Veronica: I always do.

Both father and daughter make huge sacrifices for each other throughout the show. And when one of the mysteries of the first season threaten the very core of their relationship, Veronica stubbornly chooses the man she calls Dad. Twice.

Gibbs also has a father-like relationship with Abby, but with Ziva you get to see how they go from enemies to reluctant allies to trusting each other completely.

Gibbs: You lied to me.
Ziva: No. When I told you Ari was innocent. I believed it. But yes. I would have lied to you. He was – my brother. And you were nothing. But I was wrong about Ari, and you. When I pulled the trigger to save your life, I was not following orders. I mean how could you even think – he was my brother. And now he is gone. Eli is all but dead to me. And the closest thing I have . . . to a father is accusing me . . .

These two have so many great moments together, after getting off to a rocky start as his crusty British ways tend not to mesh with her irreverent attitude. One the key episodes in their father/daughter relationship is “Helpless,” where Buffy asks Giles to take her to the ice show in her father’s place. Unfortunately, Giles has to betray her trust for a Slayer coming-of-age test, and when he can’t bear to lie to her anymore, his “father’s love” for Buffy causes him to lose his job as her Watcher.

And then there’s this touching moment in the midst of Buffy being under a love spell in “Something Blue”:

Buffy: I’m not crazy, and I know that you probably don’t approve, and my father’s not that far away, I mean, he could– but this day is about family – my real family – and I would like you to be the one to give me away.
Giles: (Touched) Oh, Buffy! That’s.. that’s so.. (Comes to his senses) Oh! For God’s sake! This is nonsense. Something is making you act this way. Don’t you realize what you’re doing?

I love Giles’ quiet smile of relief when Buffy returns from Los Angeles in season three. And their reunion hug in season six. And when Buffy asks him to be her Watcher again in season four.

What is your favorite father/daughter pair on TV?