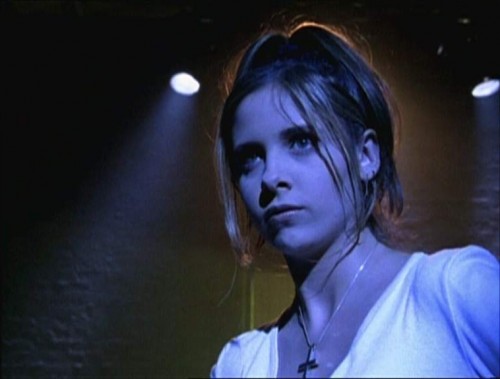 Okay, I finally caved. As soon as I finished the final episode of Angel, I wanted to go back and rewatch Buffy the Vampire Slayer from the beginning. I managed to hold off for several months by rewatching some of my favorite episodes, reading many of the comics, and watching various shows featuring Buffy alums (Bones, Veronica Mars, Tru Calling). But after reading a fellow blogger’s review of season one, the allure grew too strong.

I’m going to take things a bit more slowly this time. I’m also not planning to watch the later seasons in tandem with Angel, except for perhaps a few key crossover episodes. I simply enjoy Buffy more, and all the flipping back and forth got to be annoying. Plus I’ve already seen the first season of Angel twice.

I’m also hoping to review each episode as I go through, most likely writing about several episodes in each post.

“Welcome to the Hellmouth” and “The Harvest”

What is widely considered the show’s weakest season opens with a two-part introduction to Sunnydale High, the main characters, and of course vampires. This was my third time watching the two episodes. The first time I thought it was decent but campy, and the vampires creeped me out. The second time I enjoyed seeing Alyson Hannigan from How I Met Your Mother and Anthony Stewart Head from Merlin in different roles, but it bored me a little.

I guess third time’s the charm, because this time around I loved it.

Oh, sure, I still thought the vampires were stupid and I still consider The Master one of the most unimaginative villains of all time, but I wasn’t watching the episodes for them. I was watching to see Buffy meet Xander and Willow and Giles and Angel for the very first time. Knowing now all they’d eventually go through together made the episodes amazing.

I hadn’t remember Angel seeming so much of a wimp. Knowing that his fighting skills are pretty much even with Buffy’s, his inaction in these episodes seems ludicrous, especially with what’s at stake. Of course, it could partly be him trying to keep his true nature a secret from Buffy, but the end of the world is a bit more important. Darla seemed too easily cowed as well, though she at least held her own in a fight.

Even this early on, the dialogue was snappy and distinct, a fitting beginning for what would eventually become known as “Slayer Slang.” A few choice bits:

“I didn’t say I’d never slay another vampire. It’s not like I have all these fluffy bunny feelings for them, I’m just not gonna get way extracurricular with it.”

Willow: Do you have Theories in Trig? You should check it out.
Xander: Check it out?
Willow: From the library. Where the books live.

It was also fun getting a brief glimpse of Harmony, knowing who she would become in later seasons. But in all the flashbacks we’ve gotten of main vampires, it seems weird that there’s no mention (at least that I remember) of Luke. You’d think a vampire that powerful and connected to The Master would have been around for a while. Trivia note: the same actor plays the Judge in season 2.

In all, not the best first episode for someone new to the show (unless you’ll be able to convince them to keep watching no matter how they feel about season one), but a must-see for fans. It makes me excited for the rest of the season.