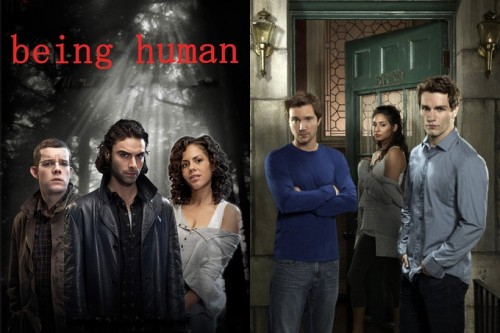 Oddly enough, it was the American adaption of Being Human that caused me to watch the British version, even though I watched the British one first. Confused? I heard about SyFy’s version somewhere (most likely a Hulu ad, though I don’t remember specifically), and it intrigued me enough to do some looking into the show.

I found out pretty quickly that there was a BBC version of the show as well, and I was faced with a dilemma. Which one should I watch? I knew whichever one I watched first would color my perceptions of the other, and perhaps ruin it for me completely. I’d barely gotten through one episode of the British version of The Office after seeing several seasons of the US version. I hadn’t even made it through half of the Buffy the Vampire Slayer movie after watching the show. (Though to be fair, the movie is almost universally considered terrible. But if they ever reboot the show, I’m thinking a British version would be a pretty cool twist.) I finally decided to watch the British version of Being Human because a) it was there first, and b) it had more episodes out, so a greater loss if they were ruined.

Both shows center on three supernatural beings who share a house. Two unlikely best friends, a vampire and a werewolf, rent a house to try and live a more normal human life, only to find out the place is haunted by the ghost of the former occupant.

The British version is more raw, bloody, and gruesome. It’s probably the least family-friendly show I watch, and I almost stopped watching it after the first episode. In contrast, the American version seemed sanitized and slick. The special effects were better, the minor characters were prettier, but the trio of stars didn’t have the same connection and chemistry.

The American version succeeded best when it differed from the UK one, so I’m really looking forward to season two, when the storyline will completely diverge. Josh’s sister was a great addition, and it was fun seeing some plot points from later on in the British version make it into the first season of the American one (whether intentionally or not). With knowing how most of the season would go, I loved that they changed things up in the finale and actually surprised me.

As far as the main characters go, I prefer Mitchell to Aidan. I enjoy both George and Josh, but I think George is an easier character to connect to (however, I think the actor Russell Tovey looks far more like a Mitchell than a George, so I confused the names in my mind for a series and a half). And while Annie got on my nerves a lot, she does make Sally look a bit bland. I hope Sally will get more to do in season two, and Nora as well (Nina has her beat so far).

I really don’t see the deep friendship and camaraderie among the characters in the American version, though it appears they tried to amp up the situational drama, especially with Josh’s character (with four distinct occurrences, all but one from later in the UK show). The British version, however, lives on emotional drama. There are more tears in a single episode of the British show than the entire season of the American version. Are the British just more comfortable with men crying in front of other people?

It’s no surprise that I like the original Being Human more than the remake, but the latter showed enough glimpses of brilliance for me to keep watching.