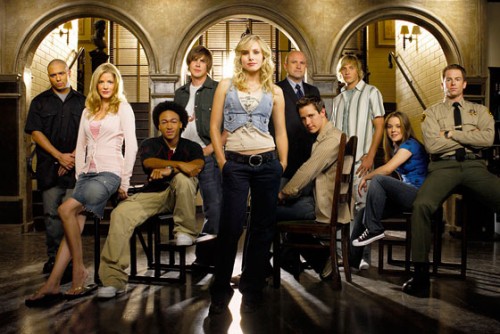 There’s a special feeling of sadness you get when you watch the last episode of a favorite show you already know has been canceled. It’s heightened when it’s been several years since the cancellation and you know there’s no chance of another network picking it up, and when it’s not just a rookie show but you’ve had several seasons to fall in love with the characters. Veronica Mars has both.

Of course, I willingly began watching the show knowing it had been canceled before its time. But I figured the third season would have to be not so great for them the CW to cancel it, and I would be glad the show hadn’t fallen into complete mediocrity before saying goodbye. But season three was great. Perhaps not as gripping as the first two, but that was the fault of exchanging season-long story arcs for shorter ones.

I personally blame the third season intro credits. Instead of sassy and fun with poignant undertones like the previous ones, they stripped down the theme song into an echo of its former self and kept only the poignantness with sepia tones and serious looks.

Since I watched the entire show in less than three weeks, the untimely end hit especially hard. After new, witty, endearing episodes an average of three times a day for weeks straight, it’s depressing to think that I will never again watch a new episode of Veronica Mars.

And unlike shows with planned endings, you never find out what happens to the characters. Fortunately, the show didn’t leave too many dangling plot threads. You don’t find out who is elected sheriff, though you can assume it’s Vinnie – who would have made a perfect replacement for Sheriff Lamb, while Keith goes back to being a PI. You don’t know if Weevil returns to a life of crime. And you don’t know who Veronica ends up with.

For the latter, in my mind she and Logan end up together. Piz has no personality, and their relationship hasn’t weathered any storms. Duncan is long gone. And even though Leo’s around again, I never really felt the two of them as a couple. With Logan and Veronica, however, the sparks are as subtle as lightning bolts.

I know I already compared the show to Buffy the Vampire Slayer, but the parallels extend far beyond the setting and sense of humor. Both Buffy and Veronica are somewhat unlikeable by themselves, but you grow to care about them through their friendships and relationships. Many of the supporting characters in one show match up with similar characters in the other. Keith Mars is Giles. Wallace is Xander. Mac is Willow (especially the early Willow). Sheriff Lamb is Principal Snyder (smug idiot in charge). Vinnie is Ethan Rayne (evil counterpart to Keith/Giles). Jackie is Cordelia. Duncan is Angel (right down to the ex-girlfriend dying and the baby living – plus he does the brooding thing awfully well). And even more, the latter two pairs leave the show around the senior year of high school. Leo is Riley.

And of course, Logan is Spike. Both hate a certain petite blonde at the beginning of the show, form a reluctant truce when he turns to her for help, and eventually fall in love. Both mourn lost love with alcohol and meaningless relationships. Both have an irreverent sense of humor and authority figures rarely take them seriously. Spunky kids can reach them when no one else can, but their attempts at matchmaking don’t help. Both love a good spot of violence.

Now does anyone know of another show that matches these two with crisp dialogue and complexity? I could use something new and awesome to get me over these canceled show blues. In the meantime, I wonder if there’s any Veronica Mars fan fiction. Or comics.