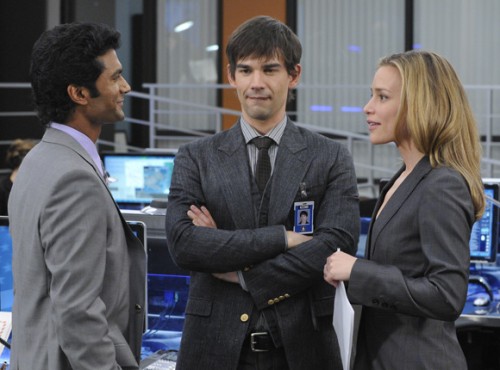 Few people would claim that the TV show Covert Affairs gives an accurate picture of CIA. Rookie operative Annie Walker sees far too much action for that to be possible. Yet, much like summer blockbusters tend to take viewers on adventures of suspended belief, Covert Affairs turns on the charm and offers a fun ride if you promise not to nitpick.

The fact that season two begins mere days after the season one finale does establish the events in a more reasonable time frame (spacing 11 action-packed episodes over a full year instead of a few months makes things more plausible). But enough of analyzing the realism. Is Covert Affairs worth watching? Yes!

This is a USA Network show, so as you’d expect, it’s the characters that make this show worth watching. Piper Perabo does a decent job as Annie, but it’s Christopher Gorham’s role as Auggie Anderson that really makes the show shine. Auggie used to be a field operative, but after an explosion left him blind he was moved to an analyst position (complete with a bunch of cool toys). He helps Annie through her first rough weeks at the Agency and becomes a close friend and confidant. It’s Auggie she turns to when she decides to ignore protocol to protect an asset or catch a bad guy, and he jumps at the opportunity to do a little field work.

Their boss and their boss’s boss are a married couple, which makes things interesting. Sometimes their disagreements and mistrust just seem to fill time on an episode, but Peter Gallagher and Kari Matchett are such excellent actors you don’t really mind.

Caution – spoilers for season 2, episode 1 beyond this point!

The promos for the season premiere did a good job of not letting you know the outcome of the season one cliffhanger. I was a little surprised they decided to keep Ben Mercer alive. I was kind of hoping he would be gone this season. Both Jai and Auggie make far superior romantic interests for Annie (though I foresee – and prefer – Auggie staying just a friend for the next season or two). I don’t understand why Ben wasn’t able to say goodbye to Annie – they were together for all those days, and it’s not like the CIA couldn’t orchestrate a simple secret meeting. But at least it seems like Ben won’t be getting much screen time for the next while.

One of my biggest disappointments about the premiere was how little we saw of Jai (Sendhil Ramamurthy). Though since he’s now in the credits (and Ben isn’t – yay!), I imagine that will change in future episodes.

The new credits are a nice mix of old and new. I love the theme song (though it seems spliced a bit awkwardly this time). I’m glad the rest of the main cast gets to show their faces. I hope Anne Dudek (who plays Annie’s sister Danielle) has more to do this season, and rumors about her growing suspicions indicate that will happen.