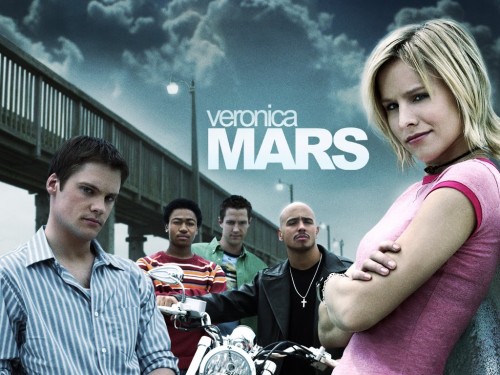 Wow. I’m just five episodes into this show, and already it’s blowing me away.

TV’s queasy season has arrived. From now until late May, ABC, CBS, Fox, NBC and The CW will determine which shows will be back next fall and which will be join Tru Calling, Heroes and Veronica Mars over at the MIA Network. (MIA is fictional people; stop scouring your on-screen channel guide now.)

I bookmarked the page and checked back frequently for updates (maybe once a week at first, but eventually every day around April and early May). I knew Tru Calling starred Eliza Dushku (Faith from Buffy the Vampire Slayer and Angel, Echo from Dollhouse), and I had the first few seasons of Heroes (watched the pilot, but the hand down the garbage disposal still makes me grimace and has deterred further watching), but I had no clue what Veronica Mars was.

The show popped up on my radar a few other times over the past months. I noticed it on the resume of several Whedonverse alums, particularly Charisma Carpenter (Cordelia on Buffy and Angel) and Alyson Hannigan (Willow on Buffy and Lily on How I Met Your Mother).

But it wasn’t until I read somewhere that the humor and dialogue on the show was very similar to Buffy that I knew I had to try it out. I had just completed my goal of watching every episode of every Joss Whedon show, and I needed something to fill that particularly quirky niche. And I was delighted to find out that Netflix had all three seasons of Veronica Mars on watch instantly.

The sassy nature of the show captured my interest immediately. But then the show continued to unfold new layers, and I knew I’d stumbled across something special.

On the surface, it’s a show about a saucy blonde going to high school in southern California (ditto for Buffy).

On an episodic level, Veronica’s dad is a private investigator, she helps him out with cases, and she finds some of her own (modern take on Nancy Drew).

Then the show delves into her character backstory. Less than a year before the show’s start, Veronica was dating Duncan Kane and was a part of his group of friends. Now she’s forced to keep seeing them at school, and they alternately ignore or belittle her. This ties into the show’s theme song, “We Used to be Friends.”

And then we find out Duncan’s sister Lilly, Veronica’s best friend, was murdered the previous October. At the time, Veronica’s father was sheriff, and pursued Duncan and Lily’s father as his chief suspect. Mr. Kane – rich, powerful, and beloved in the community – told the media and Keith Mars was ousted as sheriff. Veronica’s mom left town.

If that wasn’t enough, we find out that things don’t add up with Lilly’s murder. And Veronica’s mother may have had an ulterior motive for leaving town.

And this is only five episodes into the show!

Kristen Bell does an excellent job playing the various facets of Veronica. She can switch from pensive to spunky to flirty and back again easily. And while Veronica has plenty of Buffy-like sass, she also has Willow’s brains. Percy Daggs III plays Wallace, a Xander-like companion I hope the writers will give more to do in future episodes. Teddy Dunn plays the brooding Duncan Kane well, and keeps reminding me of a young Shane West.

I have a feeling I’m going to be upset about this show’s cancellation.

Side Note: While trying to figure out what to call this show’s genre (if anyone has other suggestions than my choice of “mystery” feel free to mention them!), I came across this quote from Joss Whedon about Veronica Mars:

My peeps and I just finished a crazed Veronica Marsathon, and I can no longer restrain myself. Best. Show. Ever. Seriously, I’ve never gotten more wrapped up in a show I wasn’t making, and maybe even more than those. Crazy crisp dialogue. Incredibly tight plotting. Big emotion, I mean BIG, and charsimatic actors and I was just DYING from the mystery and the relationships and PAIN, this show knows from pain and no, I don’t care, laugh all you want, I had to share this. These guys know what they’re doing on a level that intimidates me. It’s the Harry Potter of shows. There. I said it.