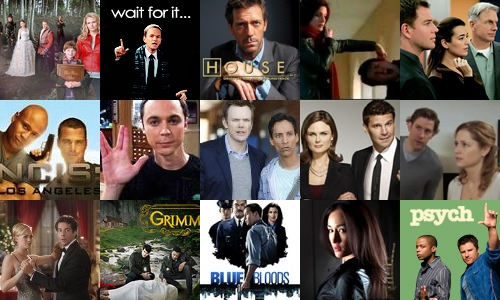 Now that CBS has finally posted its fall 2011 schedule, I have a good idea what I’ll be watching come September. Most of the time, of course, I will watch shows online the day after they air, but if I get a chance to watch them live, this will be my schedule.

This fairy tale meets modern life sounds like it has promise, and I love the promos.

Chuck’s move to Fridays and House’s move to 9 finally makes my Mondays conflict-free (though I imagine Chuck’s ratings would have greatly improved with House’s move – seriously, is it any wonder the show wasn’t doing well against BOTH House and HIMYM?). Two Broke Girls sounds interesting, and will nicely fit in my half-hour gap.

CBS was smart not to mess with its Tuesday domination. Both shows had awesome finales Tuesday night, and NCIS: LA was finally renewed yesterday. I was a bit worried that they were going to off Jimmy Palmer in the NCIS finale, but Los Angeles ended with the more dramatic cliffhanger, making me anxious for season 3. I will have a hard time deciding what to watch at 9, but the CW’s terrible online viewing experience may tip the scale toward Sarah Michelle Gellar’s Ringer.

I will be checking out these two shows solely for their Whedonverse alums: Suburgatory features Alan Tudyk (Firefly and Dollhouse), while Free Agents stars Anthony Stewart Head (Buffy the Vampire Slayer and Merlin).

Thursdays are still full of conflict. As usual, I probably will watch The Big Bang Theory live and Community on Hulu when both are airing new episodes. How to Be a Gentleman sounds promising, and I probably would have checked the show out anyway even if it didn’t perfectly fill a half-hour gap (the promo, however leaves a bit to be desired). Watching Bones will depend on if I catch up on back seasons of the show over the summer. The Office’s penultimate episode of season 7 proved that the show can still be hilarious without Michael Scott, so I plan to keep watching. Jim Caviezel (The Count of Monte Cristo, The Passion of the Christ) stars in Person of Interest, and the sneak peek was excellent.

It seems a bit odd, having such a solid line-up of shows for a Friday night. Blue Bloods has proved it can hold its own on the evening, but its family vibe makes it a more likely choice for those who stay in Friday nights. I suspect the young-adult-aimed Chuck won’t do as well, but since it’s the final season of the show the numbers aren’t as important. And it’s pitted against fellow action show Nikita, which also doesn’t seem like a good Friday night fit. Grimm has a tough shot against both a cop show and TWO speculative fan favorites, Fringe and Supernatural (which even I may be watching instead if I have time to check them out this summer).

USA’s Psych typically counts as a summer show, it doesn’t sound like it will be starting until August or September this year (since it’s cable, I won’t be watching it live, though). There are a few other shows on the major networks and some mid-season pickups I also plan to check out if I have time.