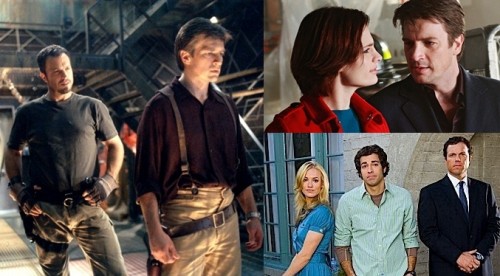 Thanks to this week’s episode of The Office, I’ve had “Closing Time” (Semisonic) running through my head all evening. Especially haunting is the line: Every new beginning comes from some other beginning’s end.

For some reason, I transferred that idea to TV shows. How many great shows exist because actors’ previous shows were canceled (either prematurely or not)?

To start off, let’s take a look at the poster child for all canceled shows: Firefly. Many of the actors have gone on to have guest spots and reoccurring roles in other shows, and some have even become regular cast members of other shows that were canceled in turn (Morena Baccarin in V, Summer Glau in The Cape, etc.). But out of the ashes of the Serenity rose two other great shows, now in their 4th and 5th seasons.

Nathan Fillion is Castle. It is impossible to imagine another actor playing his role on the show, and since Fillion influenced Stana Katic becoming his co-star, Beckett would be different as well.

While I suppose Chuck could have survived without Adam Baldwin playing John Casey, would we have wanted it to? His grunts and relationship with Morgan make the show.

Another show that came to mind immediately was Angel. It was canceled, and a year later, David Boreanaz ended up on Bones as Agent Seeley Booth. As much as I would have wanted Angel to continue, I think the actor is much more suited to the role of Booth.

The gap between Buffy the Vampire Slayer and How I Met Your Mother was a bit longer (2 years), but I love Alyson Hannigan in both. It seems a bit of a stretch to include Sarah Michelle Gellar and Ringer, since 15 seasons seems highly improbable for any show, and I don’t see Gellar “owning” Siobhan/Bridget yet. Anthony Stewart Head’s transition from Giles to King Uther on Merlin is more apt.

Dollhouse also pulls actors from the three ended shows above, but in a less lead-actor-to-lead-actor way. The show that really had to end so we could have Dollhouse was Battlestar Galactica. Tahmoh Penikett was vital to both shows.

I never watched Lost, so I don’t know how vital Michael Emerson’s role was to the show, but I can’t imagine Person of Interest without him.

And then there’s the whole issue of characters dying on one show only to wind up on another. Sometimes they “die” because of the new show. I could go on for hours listing examples of this, but this post would end up so full of spoilers that no one could read it without coming across something they didn’t know. So I’ll stay mum for now.

Less spoilery is characters moving away or otherwise disappearing from the scope of a show before the end to star in a different show. Jared Padalecki bowed out of Gilmore Girls two years before it ended to begin Supernatural. Jennifer Morrison joined How I Met Your Mother for a year between House and Once Upon a Time.

What shows that you loved had to die so you could get a different show to love?

4 thoughts on “Some Other Beginning’s End”