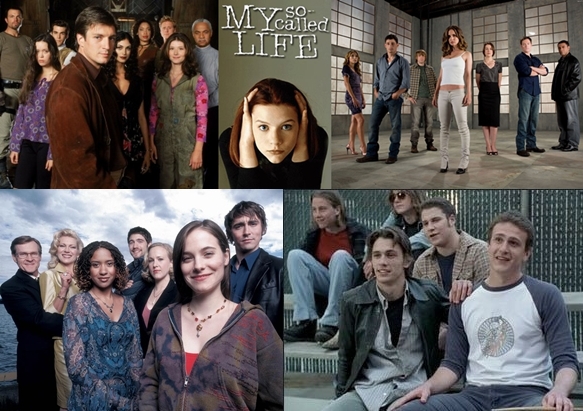 Since so many people stopped by this site for March Madness, I wanted to continue the whole Madness thing, this time with actual polls (so if things go crazy like they did with Psych vs. Castle I won’t have to count up 600 votes!). More people seemed to stop by to vote on Mondays, no matter when the bracket match ended, so I decided to continue the “M” trend with weekly match-ups/polls/competitions, and dubbed them “Monday Madness.”

This very first Monday Madness focuses on those beloved shows that ended far too quickly. Sometimes it was a lack of viewers, sometimes schedule changes and episode rearrangement, sometimes poor promotion and network mismanagement. But all of the shows have a dedication group of fans who mourn the small amount of episodes available.

But which of those canceled shows deserves to be brought back? I know most of the cast has moved on to other projects, but if you could, which shows would you bring back?

You can choose up to 10 of the thirty shows below, and if I’ve missed any of your favorites, let me know by voting in the comments! I’ve limited this poll to shows that had 3 seasons or less – if a show gets to four seasons, that usually means syndication, and I don’t want this to be about shows that made it, but the underdogs that need a second chance at life.

You’ll notice that Arrested Development is missing from this poll, because that show has already beat incredible odds to garner another season, thanks to Netflix!

I’ll announce the top 10 canceled shows that should return next week, so be sure to vote and pass along the link so your favorite shows can make it! Again, if I’ve missed a show (canceled with 3 seasons or less), vote in the comments, and I’ll total up those votes against the poll leaderboard.

Update: This poll is closed, and I will be posting about the top 10 soon. But the Monday Madness isn’t over! Go vote for your favorite quirky character!

Which TV show would you bring back if you could? (you can select up to 10)

38 thoughts on “Monday Madness: What Canceled TV Show Should Return?”