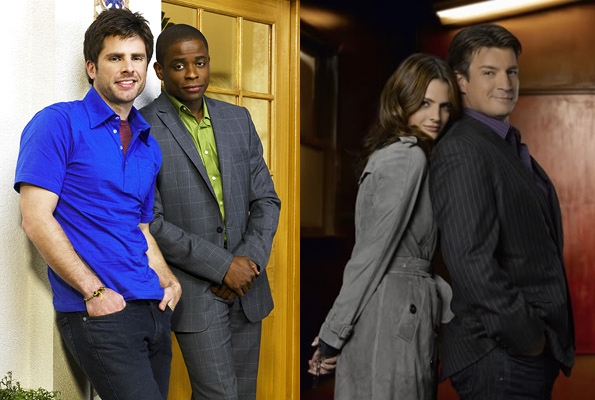 After weeks of voting, it is down to the final match! Whenever I mentioned the Psych versus Community matchup, people groaned about making the choice, and the buzz made it my most-viewed post ever within a week! 163 brave souls made a decision, and Psych won, 91 to 72. Castle’s victory over Warehouse 13 was easier, as the SyFy show only managed to garner 4 votes.

And now, lovable rogue Nathan Fillion, who really is ruggedly handsome (and who is celebrating his birthday by raising money for charity: water – donate now!), along with the beautiful Stana Katic and the rest of the cast of Castle, goes up against the kings of comedy and 80s pop culture, the unstoppable James Roday and the smooth Dulé Hill. Shawn and Gus. Castle and Beckett. Which team do you want on your side?

The last battle begins. Which show will emerge victorious? It’s up to you! Vote in the comments below! And be sure to spread the word so your show can win!

Also remember, every comment (one per person per post, but you can comment on any or all of the hundreds of posts on this site) will give you one entry toward the $15 Amazon gift card!