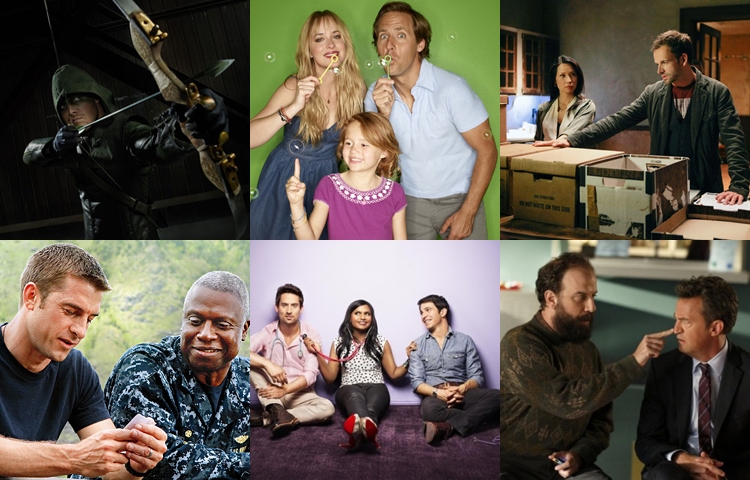 Just about all of broadcast TV’s new fall shows have aired at least two episodes now, so I think it’s time for a look at which ones soared, which ones got off to a rough start, and which ones nosedived. I’m dividing this list up into several groups so you can get an idea of what my preferences and interest levels were going in.

Shows I Haven’t Seen and Never Plan To:

Out of the 20 new shows that have debuted so far, the list of those I haven’t seen is pretty small: 7. I hate country music, so Nashville was out. The rest (Made In Jersey, The Mob Doctor, Partners, Emily Owens MD, Chicago Fire, and Vegas) I wasn’t interested in for one reason or another. One is already canceled, two more aren’t far behind, and none of the seven shows has been a breakout hit. I feel pretty happy with my choice not to watch them, and expect maybe 1-2 to reach a second season (not holding my breath, though).

Shows I Never Planned to Watch but Did See the Pilot:

For two shows, I checked out the pilots knowing I’d never commit to watching the show. It was easy to tell from the previews that 666 Park Avenue wasn’t my type of show, but I had a chance to watch the pilot early as a TV blogger, so I tried it out. It seemed well done, but I didn’t enjoy it. The New Normal I watched out of a morbid curiosity to see how awful it would be, and aside from one or two heartfelt moments, it was utterly terrible. I didn’t laugh once.

Comedies I Thought Would Be Awful but Didn’t Mind:

Another show I got a chance to watch early was The Neighbors, which wasn’t as terrible as the previews made it out to be. I’ve seen the first two episodes, and might watch more if I’m caught up on most of my other shows and in the mood for a comedy. Guys With Kids I didn’t intend to see, by my siblings said it was pretty good, so I watched a few episodes. Both shows are more family-oriented comedies, which usually bore me, and I don’t really laugh during them, but I like having extra comedy shows to watch on dreary days.

Comedies I Like but Wouldn’t Cry Over Their Cancellation:

Every new comedy not in the above lists fits in this section. Many of them are great, but I haven’t gotten attached to any comedies so far this season. That’s probably a good thing, as Animal Practice has already been canceled. Go On is probably the best of the lot, and I expect it will return for a second season, but The Mindy Project (my pilot review here) and Ben and Kate (pilot review here) are far from out of danger despite their full-season orders. These shows are heartwarming and humorous, but they’re not laugh out loud funny. Plus, none of the characters grip me in that “I would hate to see them go” way. It could come with time, and I’ll keep watching these shows until they get terrible or get canceled.

Dramas That Didn’t Wow Me In Their First Two Episodes:

Revolution was hyped to be awesome, Beauty and the Beast was critiqued to be terrible. I was disappointed by Revolution’s pilot, but enough was done right that I gave the show another episode. When Miles was still the only character I enjoyed watching, and the rest of the show failed to interest me, I decided to stop watching. It’s too bad, because from the premise it seemed like exactly the type of show I would enjoy.

I just watched the second episode of Beauty and the Beast, and really noticed the terrible, terrible dialogue people were complaining about in the pilot (my review of it here). I so want to love this show, but the writers are making it very hard. I’m still not sure if I’ll watch a third episode. I want it to pull a Vampire Diaries and start getting really good after a few episodes, but I don’t know if there is enough backstory for the mythology of the show to grow. Also, in the second episode, several procedural issues bugged me (Don’t uniforms clear buildings? Are detectives allowed to be present during the autopsy of someone they killed?), and Cat had a sister appear out of nowhere. The first episode got good ratings for the CW, but the second quickly dropped, so it might not get time to improve. Might be better to replace it with the midseason Cult, to bring over Matt Davis (Alaric) fans from The Vampire Diaries. (I know I had no plans to watch the show, but after marathoning through The Vampire Diaries, Matt Davis has become one of my favorite actors, so I definitely plan to give Cult a few episodes to impress me.)

As I was writing this, I kept thinking, I wonder what Revolution and Beauty and the Beast would have been like with Joss Whedon in charge? Can’t wait for S.H.I.E.L.D.!

The three drama shows I was most looking forward to turned out to be the ones I loved most this season. My favorite pilot episode, Last Resort (my review here), hasn’t quite lived up to its potential in subsequent episodes, but it still keeps me glued to the screen almost every minute. Its low ratings don’t signal much hope for renewal, but ABC shows regularly do poorly in that timeslot. ABC did order 2 more scripts for the show, so it’s unlikely to get pulled from the schedule immediately (I was starting to worry about that), but that may be just to give the show some sort of resolution. All the same, I’ve tried to temper my attachment to the show and just enjoy it while it lasts.

Elementary (my review of the pilot here) has been just as awesome as I hoped. I’ve been completely won over to the idea of a female Watson, and it’s been nice watching their friendship slowly grow over the past few episodes. Both annoy each other like crazy, yet their respect and admiration for each other is beginning to build. The cases seem to have an extra twist compared to most crime drama shows, which fits well with the need to bring in a consultant. I’m really sorry for the people who have a hard time understanding Jonny Lee Miller’s brisk British accent, but I feel the speed helps convey Sherlock’s fast mental process. Oh, and the opening credits are amazing:

Last but not least, Arrow has been amazing so far. While the pilot (my review here) had a good deal of the plot revealed in preview clips and therefore wasn’t quite as engaging, the second episode (my review here) had everything I was looking for: great action sequences, insightful character moments, and hints at series-long mythology-building. The second episode got the exact same excellent rating as the first (double that of typical CW “steady performers”), so I’m looking forward to this show being around for a while.

Three great dramas. Three good comedies. That’s my haul from broadcast TV’s new fall shows, and I managed to find a show I liked on every single network. I think 3, maybe 4, will stick around for a second season.

Which new shows will you keep watching?