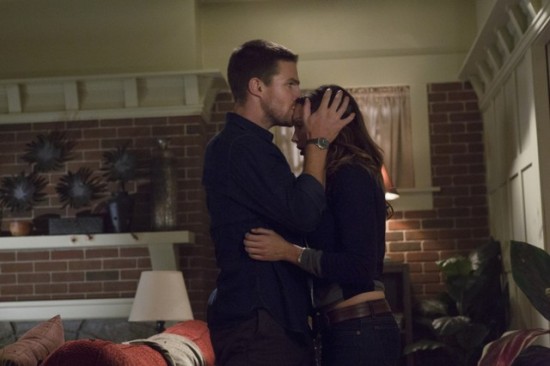 Okay, this is the Arrow I’ve been waiting for! This second episode was awesome, and I enjoyed it even more than the pilot (which had gotten spoiled a bit, but still). Cool action scenes, great character moments, nonstop tension, and season-building intrigue!

The most shocking moment of this sophomore episode was the reveal that Oliver’s mom sabotaged the yacht! Wow, that is one cold-hearted woman. To knowingly try to kill not only her husband (granted, things might have been slightly soured with him, considering her relationship with Walter) but her own son? Not to mention everyone else on board? I expected her to be behind the kidnapping to make sure Oliver didn’t know anything, but I thought she genuinely loved her son. Maybe she didn’t know he’d be on the boat that night.

The second most shocking moment was the archer on the island shooting Oliver just as he finishes burying his father. The hood, the bow – it was so reminiscent of Oliver just before he left the island. We’d had hints before that he wasn’t alone for the entire 5 years, but being shot by someone he became . . . I thought it was a dream for a few seconds.

The corrupt businessman Arrow set his sights on in “Honor Thy Father” was again someone Laurel Lance was trying to take down the legal way. But things played out a lot differently (and much cooler) than they did in the pilot. The bad guy refusing to comply or even let the police know about the attack and threats, the decision to go after Laurel and the awesome fight in her apartment, and the taped confession on the arrow used to disarm Detective Lance (without so much as a scratch!).

China White’s arrival was hyped a bit too much for her few minutes of screen time (I’m guessing she’s a bigger deal to fans of the comics?), but she’ll certainly return later on this season. And I think it’s good that the show isn’t jumping too quickly into superhero vs. supervillain stories – Starling City seems to have enough ordinary bad guys to keep Arrow busy for the majority of the season.

Tommy Merlyn seemed to take a step back away from finding out Oliver’s secrets, while Dig took a step forward. I feel like it’s only a matter of time before Detective Lance or someone else puts two and two together and realizes Arrow emerged right after Oliver got home (Oliver did mention that the kidnapping moved up his timetable, so I guess he intended for it to not be so glaringly obvious). I don’t think there will be many more episodes before Dig learns what’s going on – Oliver needs someone to help him try to be in two places at once, not to mention someone with good fighting skills for backup.

Oliver connected with both Thea and Laurel (anyone else still bugged by how alike they look?) in this episode, some of it apparently some directional retooling since the pilot – especially going from telling Laurel to stay away from him to eating ice cream in her apartment. I did like how they used Oliver’s conversation with Thea to make the 180 degree turn more realistic. I also enjoyed Stephen Amell being able to show some emotion – burying his father, his confession at the headstone. He does the stonefaced act so well, and it’s needed for his character, but he has to show some vulnerability so viewers can connect with him.

The voiceovers were a little less prominent in this episode, which is a good thing. I only got annoyed with them once, when Oliver’s explaining that since the bad guy didn’t follow orders, he was going to get a different type of justice. Um, duh! Seeing Oliver suit up and then go after the guy made that perfectly clear already. One other weak part of the episode was the girl trying to get justice for her father – her acting was so bad it almost made me cringe, and Katie Cassidy’s acting seemed to drop a notch around her too. Fortunately, the guest actress shouldn’t be back.

In all, one of the best drama episodes I’ve seen so far this year, and the best second episode of any of the new dramas I’ve seen (still have tomorrow’s Beauty and the Beast one, but I’m not holding my breath). If it keeps up this quality, Arrow may just become my favorite new show of the season!