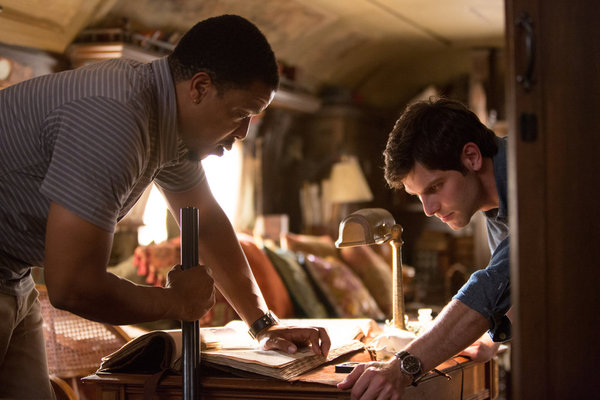 The story on last week’s Grimm focuses on a father and daughter who are badger-like Wesen, while Monroe manages the shop for Rosalee, and Renard and Juliette suffer some side effects from the “pure of heart” potion and the kiss.

Again, the previews for the episode were deceiving, as Juliette remembering Nick was only a dream he had. Poor guy. And it looks like his efforts at rekindling romance have hit a significant roadblock. Near the end of the episode, after a candlelight dinner, Nick mentioned to Juliette that they used to dance on nights like this, and she suggests doing so might help her remember.

They slow dance and share a kiss, only for Juliette to look up and see Renard, not Nick. A similar thing happened to Renard while he was kissing Mia (in a deleted scene from the previous episode), and in this episode, Renard finds himself typing Juliette’s name over and over.

Two of our new regular cast members were only seen over the phone this week. Adalind resurfaces to taunt Renard and ask about her mother’s murder. And Rosalee hasn’t quite disappeared from the show yet – she’s giving Monroe information about running the shop while she cares for her aunt.

The side story about Monroe putting the wrong ingredient in a remedy, with disastrous results, was funny, but I’m still missing the Nick/Monroe bromance from season one. Now that Monroe has Rosalee, and Hank is in the know, Nick and Monroe don’t spend much time together.

But Hank’s moments in this episode were good, too, especially Nick taking him to the trailer for the first time. I loved him finding out that Monroe had saved his life many months ago, though I was worried for a few seconds that he’d go all cop and be mad at Monroe for taking the law into his own hands.

For the main case of the week, it was a bit obvious (thanks to the episode title and the opening quote) that the little girl was the one launching the attacks. Nick “rescuing” her from the cool-looking “badger den” was a nice callback to the pilot episode of the show, and was neatly subverted by the girl being the murderer. The father was played by Josh Stewart (No Ordinary Family, The Dark Knight Rises), who did a good job of balancing the maybe-murderer, maybe-scared-father role.

I enjoyed getting another glimpse into how the Wesen world works, as Monroe contacts a security guard at a juvenile detention facility who regular deals with kids who mature too soon and need help managing their Wesen nature.

All in all, this was a great episode of Grimm, despite the lack of Monroe time.