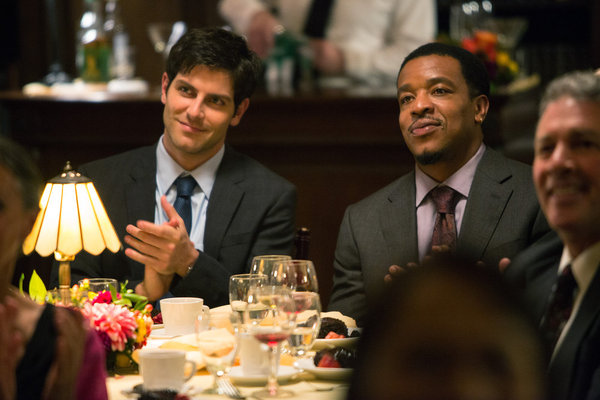 This week’s “Previously On” clips seemed to indicate we’d get some movement on the Renard front – both with the effects of the potion and his relationship with his brother. Unfortunately, things still seem to be progressing very slowly. Now I’m just hoping we get some major developments for the midseason finale.

Full review here: Billie Doux: Grimm: The Other Side.

At least the Wesen-of-the-week case had some interesting twists. A group of gifted students celebrate a successful practice for an academic decathlon, but on the way home one of them is brutally murdered. Nick and Hank realize the attack was likely from a violent Wesen, so they try to figure out which of the boy’s friends and acquaintances are Wesen.

The decathlon coach is Lowen, which fits the profile, but Renard argues that you can’t bring in a teacher on just the fact that they don’t have an alibi (wondering how these conversations will differ once Renard comes clean on the fact that he’s half Hexenbiest, half Royal, and he knows Nick’s a Grimm). After a second member of the decathlon team is murdered, Nick and Hank visit a third student, whose watch was found on the body, and find out both he and his mother are tortoise-like Wesen.

Nick and Hank do some research and find out Pierce and his mother are both Genio Innocuo, an intelligence, peaceful form of Wesen. (The notes in the journal about a 19th-century Grimm killing a group of them just because they were Wesen is sickening – how recent is the trend for Grimm to only hunt violent Wesen? From most Wesen reactions, Nick is pretty unique with his value system, but even Aunt Marie only told him to kill the bad ones, indicating that she thought some were good.) Still feeling the Lowen teacher is their best suspect, the two go to question him, only to find his body, viciously mauled like the others.

The student, Pierce, discovers a load of bloody clothes in the washer, and calls Nick, thinking his mom has been killing off his friends. But when Pierce pulls out the clothes to confront her, he finds out they’re his. As she tries to explain that she didn’t know it would be like this, he morphs into a Lowen and attacks her.

Nick and Hank arrive to find the mother wounded but alive. Pierce as a Lowen attacks Nick, and Hank, seeing only the human side, tries to explain to Nick that it’s the kid (one very helpful thing about Hank not being a Grimm – if they see a Wesen only in Wesen form, Hank will be able to identify its human side). Pierce gets away, and his mother explains she spliced his DNA with that of a Lowen in utero, but she didn’t realize she’d be creating two separate personalities. Pierce doesn’t remember anything when he woges into a Lowen – the competitive, violent nature just takes over, killing not only the competition, but anyone who gets in his way (like the teacher who planned to withdraw the decathlon team because of the murders).

The police find Pierce about to commit suicide off a water tower after realizing he killed his friends. Nick isn’t able to talk him out of jumping, but gets close enough to grab his arm and save him. But unlike last week’s episode, where there are Wesen in place to take care of violent young Wesen in juvenile detention, Pierce is 18 and there doesn’t seem to be similar measures available for adults. The scene cuts away just as Lowen Pierce is about to attack two inmates who were picking on him. So did Nick do the wise thing in saving his life?

In other storylines this week, Adalind teams up with Renard’s brother, claiming to have information on Sean and his Grimm. Eric divulges a bit of Sean’s past – after it was found out that Sean’s mother was a Hexenbiest, she took her son to Portland, or as Eric put it (incorrectly), the farther reaches of the Louisiana Purchase. (Are the French sore about that? Did the Royal families have something to do with the sale? Has longer than normal human lifespans been ruled out for Royals and/or Wesen?)

The Portland PD has a new intern, played by Michael Grant Terry (Wendell Bray from Bones, where he was also an intern, um, squintern). This is the start of a multi-episode arc. It seems awfully convenient that the case he started following Nick and Hank’s careers was the pilot episode case. Were the writers just being lazy and not wanting to come up with a new prior case, or is there a reason that case caught the future intern’s eye?

Both Renard and Juliette are still feeling the aftereffects of the kiss/potion/spell combination. For Juliette, other than seeing Sean’s face after kissing Nick, the effects seem to be limited to just unease around him, made worse after attending an award banquet in his honor, and then accepting a ride home from him after Nick and Hank were called out to the first murder.

Renard’s symptoms are much worse, causing him to creepily stalk into Juliette’s house after dropping her off, peek into the bathroom while she’s taking a shower, and break the glass on a picture of her and Nick. Afterwards he drives his vehicle crazily through the streets, nearly hits a guy, and then punches him when the guy insists on taking his keys. All that leads him seek relief at the apothecary shop, where Monroe offers his own love-sick support. Figuring out that this obsession is the result of some sort of spell, Monroe says he’ll need both the obsesser and obsessee present to have any chance of fixing things. Renard is unwilling to do that, but Monroe cautions that things will only get worse, especially for anyone standing between him and the object of his affections (watch out, Nick!).

Monroe doesn’t recognize Renard (he thinks he looks a little familiar). Things are sure to get interesting once people start making connections! And what has dear old Mom Burkhardt been up to all this time?