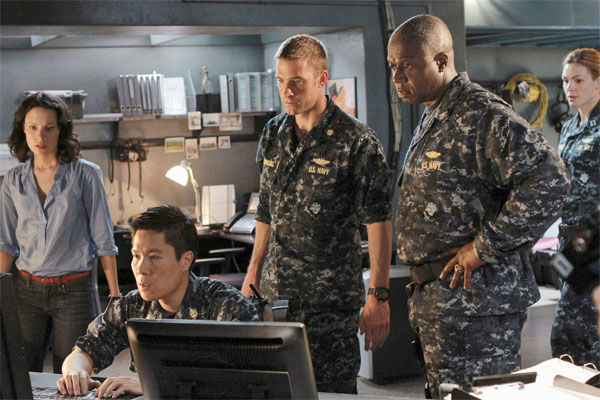 If you’ve been reading this blog, you know I’ve been rooting for Last Resort since pilot season. The premise was intriguing – a US sub disobeys orders to fire nuclear missiles and sets up its own government on a small  tropical island – but the cast really got my attention. I especially looked forward to seeing Dichen Lachman (Dollhouse) and Autumn Reeser (No Ordinary Family) back on my TV screen.

An excellent promo only whet my appetite, so when ABC offered an online pilot preview, I dived right in. And was blown away.

Two reasons I enjoyed it much more than the other new high-concept ensemble drama I plan to watch (Revolution): it had many twists and turns the promo didn’t give away, and more potential/untold history with the characters.

The action starts immediately with the sub picking up a group of Navy SEALs (one of whom is badly injured) in hostile territory. There’s a bit of a breather then, where you get a glimpse at how the crew interacts – the mutual respect between Captain Marcus Chaplin (Andre Braugher) and his XO Sam Kendal (Scott Speedman), the difficulties Lieutenant Grace Shepard (Daisy Betts) faces as the daughter of an admiral, and some tension between the COB Joseph Prosser (Robert Patrick) and the other officers, as well as between the SEALs and the officers.

But just as the crew is celebrating crossing the equator, the ominous message comes in from a secondary command post (in Antarctica!): the Colorado is ordered to fire nuclear missiles at Pakistan. Chaplin and Kendal follow procedure until the last step, when they both acknowledge that something doesn’t feel right. The secondary post is only supposed to be used when Washington is under attack or similar circumstances, but according to D.C. television stations, everything’s fine. Chaplin calls in and asks to speak with someone whose authority he recognizes, or at least to receive the command via normal channels before he wipes out millions of people in a country the US isn’t even at war with.

He gets a call back and is relieved of his command. He passes the phone to Kendal, now acting captain, who also asks that the order come through normal channels. Shortly afterwards, an incoming missile is detected, and the sub dives, but is still hit and damaged before it crashes to the bottom of the ocean. There are several casualties, including one of the SEALs.

Meanwhile, back in Washington, Kylie Sinclair (Autumn Reeser) shares techy details about the Colorado as she romances a senator’s aide, trying to get her device (which cloaks the Colorado’s unique signature) onto other subs with his senator’s help (all the geek-speak reminded me of Autumn’s role on No Ordinary Family, but Kylie acts more confidant and sexy than Katie did). A cryptic text sends her rushing to confront Admiral Shepard with what she figured out – the missile that hit the Colorado wasn’t from Pakistan, like the media claims. It was from another US submarine. “You killed your own daughter,” she accuses, but his shocked reaction convinces her he has no idea what’s really going on. Also, uniformed officers show up at the door of Kendal’s wife, Christine (played by Jessy Schram – Once Upon a Time’s Cinderella).

Chaplin, with Kendal’s support and despite open defiance from the COB and others, comes up with a plan. With some of their command equipment damaged, they head to a small nearly island with a NATO station and take it over. There they find out that the attack was from a US sub, and that someone else followed orders and fired nukes into Pakistan. Chaplin calls Admiral Shepard and gives the phone to Grace so she can assure her father that she’s alive, and Kendal is able to call his wife.

One of the SEALs, James King (Daniel Lissing), connects with island barkeep Tani Tumrenjack (Dichen Lachman, who gets little screen time in this episode, but I hope that will change!) as he requests storage for his fallen comrade’s body and alcohol to drink his sorrow away. He’s soon challenged by the self-proclaimed “mayor” of the island, Julian Serrat (Michael Sahr Ngaujah) and his goons. After stating in detail how he will kill each one of them if they don’t quit keeping him from his drink, they leave (don’t mess with Navy SEALs!). However, they only retreat to take a more aggressive approach toward these unwelcome “tourists,” later kidnapping two members of the crew.

Since now the US knows the Colorado survived (thanks to the phone calls and a betrayal from the COB and several crew who aligned with him – Lt. Shepard was forced to shoot one of them before he executed Kendal), two bombers head toward the island. Knowing they’ll bomb the island even if the sub dives to avoid the attack, Chaplin issues an ultimatum – turn them back or he fires a nuke at Washington. They retreat at the last minute, and the nuke lands in the Atlantic. Chaplin declares a 200-mile no man’s land around the island, and threatens to nuke anyone who breaches it.

And the final twist? The injured SEAL ranting about how they had the wrong intel, that they killed the wrong people, and the one at the bar, sobbing at the attack footage and saying all this is his fault. The latter scene had added shock because of how unflappable King had been until that moment.

It’s hard to think of something I didn’t like about this pilot episode. The action kept things moving, the actors fit their roles, for all the drama there were moments with the right touch of humor, and the whole episode felt as polished as a summer blockbuster.

But unlike most summer blockbusters (no matter how many unwanted sequels get made), what hit me most was the potential for future storytelling in these characters. You don’t get to spend much time with most of them, but just about every character leaves you wanting to know more about their story.

Since the initial setting is a Navy sub, it did have a bit of an NCIS feel, especially those episodes that have taken place on a ship/sub. Caplin reminded me a little of Battlestar Galactica’s Adama – protective, but not afraid to be ruthless.

If Last Resort keeps up this quality, I will be watching every episode of the show. It has a rough time slot at 8PM on Thursday, especially against The Big Bang Theory, The X Factor, 30 Rock, and The Vampire Diaries. ABC hasn’t had a new show succeed in that time slot since Ugly Betty. But Last Resort has the mettle to stick around, so I hope viewers will give it a chance. You’ll be glad you did.