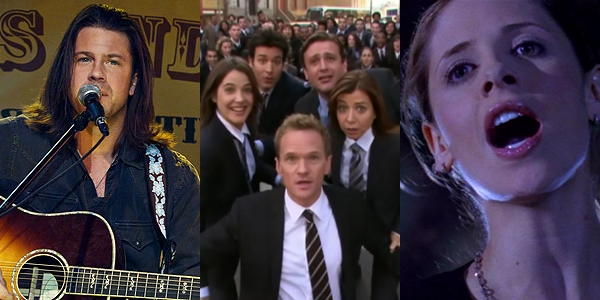 Today launches our final mini-poll event, cast-performed songs! A week from today we’ll tally the medals and see who won the 2012 TV Olympics! The current top shows only have 6-8 medals so this is still very much any show’s game!

If you have more nominations for this poll, please leave them in the comments! Songs should be from scripted live-action shows, and be performed (at least in part) by cast members. Lip-synching (sorry, Supernatural fans who nominated “Eye of the Tiger”) and guest star only performances aren’t eligible. We’re also excluding songs from all-musical shows like Glee and Smash (there would simply be too many options).

Since this poll focuses on musical performances, I’ve created a playlist for the songs that I could find on YouTube. Of course the quality of the videos will vary, with some being lyrics or photos only, and there were several I was unable to find (also, several won’t embed). Listen for help in making this very hard choice!

I will make it a little easier on you, though: Since this is the final poll of the event, you can select 10 options instead of the usual 3!

This poll will be open for one week, and remember, you can choose up to 10 options. Please spread the word so your favorites will win medals, and be sure to vote in all our current Olympic polls!

What's your favorite cast-performed song? (Choose up to 10!)