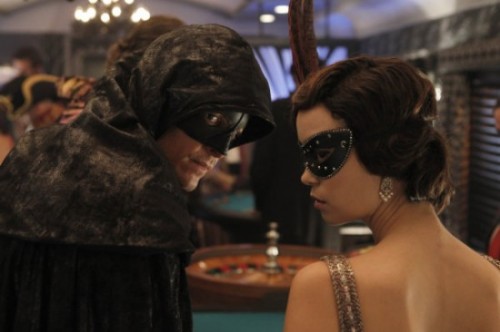 When a show is cut from 13 episodes to 10, and then the final episode is only aired online, it’s pretty safe to say that the show will be canceled. While it’s a sad ending for The Cape, I’m glad NBC at least gave fans the opportunity to watch the last episode.

I first remember the extremely vague teasers for the show. They were frustrating. I wanted to know what kind of show it was – historical? speculative? action? Then I found out Summer Glau (best known as River from Firefly) was going to be on it, and I knew I’d at least be watching the pilot.

The pilot was engaging enough for me to keep watching. A cop is framed and presumably killed, but is rescued by a criminal carnival troupe. With their help, he becomes The Cape, a superhero without supernatural abilities, who fights crime, looks out for his wife and son, and plans to bring down the man who framed him.

The visual effects and soundtrack for the show are stunning. The cast is a mix of decent to exceptional actors, and the overall story arc was pretty good. The intrigue built with each episode, but a few plot holes and unclear motivations marred the story. And it was full of dichotomies – a dark, gritty feel with very few actual deaths, a superhero without any powers, a dad putting his family through emotional hell to avoid possible physical danger.

Like No Ordinary Family, The Cape seems to be trying to blend a family show with the superhero genre, with mixed results. I enjoyed it, but it wasn’t a “must watch.” I mostly liked the fact that it fit nicely between Chuck and Castle for my Monday night Firefly trifecta (Jayne from Firefly is Casey on Chuck; Mal from Firefly is Castle on Castle). I was hoping they’d explore more of Glau’s character Orwell, but the most they gave was in dream sequences during the two-part “The Lich.”

I feel the show would have succeeded better if they’d decided to lean one way or the other – making the show darker and delve more into characters and motivations, or give it a lighter spin and inject some humor.

In all, it’s worth watching, but I don’t plan to get it on DVD. But if the soundtrack ever comes out, I’ll definitely buy it. It would make great writing music.