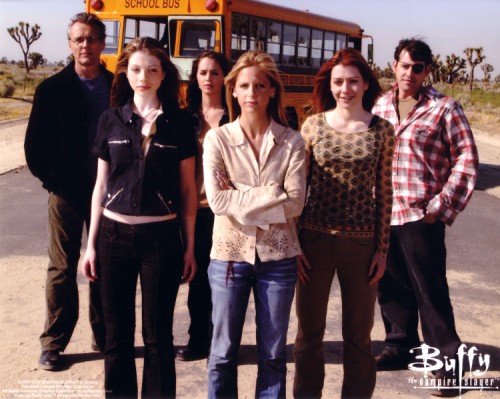 As I get further into the Buffyverse, I’m not liking some of the new things that are cropping up. The first three seasons were awesome, but season four was a bit of a letdown (I’ve read that it’s the worst season of the seven so I’m not alone in this). I suppose since I watched season one of Angel first that I grew attached to his character, so his absence in the later seasons of Buffy the Vampire Slayer is something I’m still getting used to.

Not that I mind Riley – I’ve enjoyed Marc Blucas’ acting in several movies (and even an episode of Castle). And I enjoyed Spike being in the story more – he’s hilarious.

I miss Oz. I feel they could have done a lot more with his character. And Willow went from being one of my favorite characters in the first three seasons to someone I could barely relate to, and from spoilers I’ve caught it sounds like it will only get worse.

The science vs. supernatural worked well for the plot arc of season four, and Adam as a combination of the two was a truly creepy “big bad.” I also enjoyed catching the crossovers with season one of Angel as I rewatched it.

Now with the start of season five of Buffy we have another big change – the addition of Buffy’s little sister Dawn. I knew she was coming in later seasons, so I noticed the two or three times Buffy is mentioned as an only child in earlier seasons. But I didn’t expect Dawn to be so awkwardly dropped into the show. Seriously, Buffy’s parents are divorced – couldn’t they have made it that Dawn was living with her father in Los Angeles up until this point instead of pretending that she’d been in Sunnydale this whole time? And I think it would have been far more interesting for Dawn not to know that Buffy was the Slayer at first and have to figure it out. Her initial reaction would have be much more compelling than the whiny intro she is given instead.