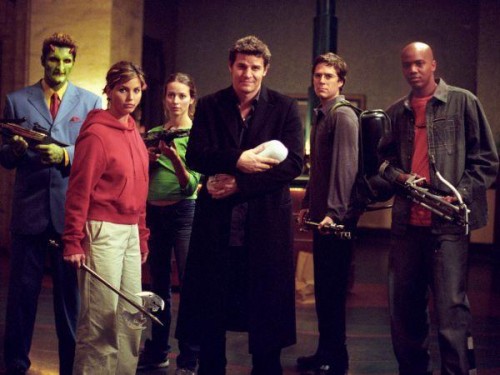 Even though I’ve unintentionally seen quite a few spoilers regarding the Buffyverse (and watching season one of Angel first didn’t help), I am still trying to watch both series “in order” as I progress. I’m following the Buffyfest episode order list, which has proved very helpful. I even watched season one of Angel again. (And in case you’re wondering, I highly recommend watching “Fool for Love” before “Darla,” to better get the full impact of Spike’s backstory.)

Near the end of the list, you can start watching Buffy the Vampire Slayer and Angel without having to worry about crossovers for a season and a half. When episodes ended on cliffhangers or with a bunch of unresolved questions, I tended to stick with that show for another episode or two. Or dozen.

The end result was that I was a full season ahead watching Buffy versus watching Angel. It surprised me. After all, I’d given up on Buffy after only two episodes the first time I tried watching, while for Angel I’d watched every episode I could at the time on Hulu.

Why did Buffy grip me when Angel didn’t? I’m not sure, but I have a few ideas. Yes, it was seasons 6 and 7 of Buffy versus seasons 3 and 4 of Angel, but I’d “known” the core characters (Angel and Cordelia) of Angel for the same amount of time as the core characters of Buffy.

Spike’s story arc was one aspect that pulled my interest toward Buffy. I never expected to like his character so much. I was a huge Buffy/Angel fan, so I expected to hate Spike. But his humor, British accent, and hopeless romanticism won me over.

Connected to that is the type of humor found in each of the shows. I laugh far more often watching Buffy than watching Angel. Angel isn’t a lighthearted spin-off show – it’s a brooding older brother to the more carefree younger sister that is Buffy.

Consider two similar episodes – “Tabula Rasa” on Buffy and “Spin the Bottle” on Angel. In both, the memories of most of main characters are wiped away for a good portion of the episode. “Tabula Rasa” is hilarious, with everyone screaming at the sight of vampires and Spike thinking he’s Giles’ son. While “Spin the Bottle” does have a few lighter moments, such as Fred thinking aliens caused the confusion, I didn’t laugh once.

Since I’m so far behind on Angel, I have to watch a bunch of episodes before I have the luxury of watching another Buffy episode. And the dark angst can get so overwhelming that I long for one of Buffy’s witty retorts, Xander’s jests during awkward or dangerous moments, or Spike’s cutting repartees.

In relation to Joss Whedon’s other works, I’d have to say that Buffy is more like Firefly with its blend of varied senses of humor, while Angel echoes the darker edge of Dollhouse.

Would Angel have been a lighter, more humor-filled show if Doyle had been able to stick around? I believe so. While I love Wesley’s character, most of his laughable moments were in his early incompetent days. Gunn is stoic. Angel broods a lot. Even Lorne, who seems to be put in as a “lighter” character, has a dismal outlook far too much of the time. Fred is more cute than funny, and Cordelia lost most of her ditzy ways early in the show.

I am looking forward to watching season five of Angel, and finding out how Spike’s addition to the cast will change things. Hopefully he’ll bring some of the humor from Buffy with him.