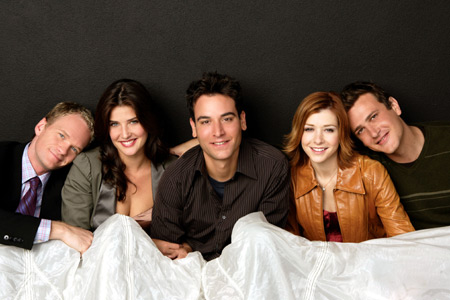 Now that I’m caught up with How I Met Your Mother, I really miss being able to watch half a dozen new episodes all at once. And tonight’s episode was only the second new episode airing since February, which made me even more eager to laugh at the gang’s continuing adventures (especially since the last one was more serious).

After my recent Buffy the Vampire Slayer marathon, it was almost shocking to see Alyson Hannigan playing a character other than Willow (I guess 7 seasons of a 45-minute show outweigh almost 6 seasons of a 20-minute show). Maybe I’ve just overdosed too much on Joss Whedon lately, because Barney made me think of Dr. Horrible in nearly every scene, and I haven’t watched that in months (though the lab coat and safety goggles in this episode of HIMYM were a fun nod to the character).

All that aside, this episode hit all the right notes. (Spoilers follow!) From the dreamy nostalgic “I Will Remember You” moments to Robin’s harrowing tale of the clock and the secret grave, the laughter never stopped coming. The contrast of Marshall and Lily’s relationship with Ted and Zoe’s was great, and I loved when Ted and Lily finally shared their difficulties with each other (the show really does need more Ted/Lily moments – it’s rare that we see them together without the whole group anymore). And of course Barney’s seemingly emotional meltdown over Marshall leaving the company was only regret at the delay of his overblown revenge plot.

The differing views on Tommy Boy were also fun.