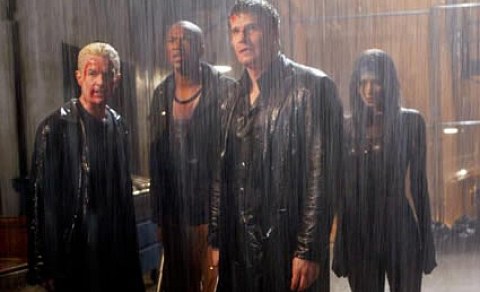 Season five of Angel is a bit of an oddity. Since Buffy the Vampire Slayer’s end (at least on TV) coincided with the end of Angel season 4, the show finds itself in the awkward place of trying to wrap up two shows at once. This is heightened by the appearance of Spike, arguably the most popular character of Buffy’s final seasons.

While most viewers seem to enjoy both shows, from reviews I’ve gathered that many Angel-only fans really resent Spike stealing the limelight. It doesn’t help that Spike is given more of the interesting character development in the early half of the season, while Angel just seems grumpy – all the time.

Though Angel captured my interest as a show far more quickly than Buffy did, for quite some time I’ve preferred Sunnydale to LA. So every allusion to BTVS on Angel brings a wave of sweet nostalgia. I only wish they could have incorporated more characters and storylines, or better yet, simply merged the two shows. As entertaining as Angel and Spike’s arguments over Buffy’s affections are, wouldn’t they have been more fun if Buffy was actually there? But since BTVS’s end seemed to be a mutual decision with the cast (especially Sarah Michelle Gellar) and crew wanting to end on a high note, I can see why more Sunnydale characters didn’t migrate to Los Angeles.

I didn’t realize how much I missed the whole Scooby gang until Andrew showed up in episode 11, “Damages.” I hadn’t been fond of Andrew’s character in BTVS, though by the end of the show his geeky ways had grown on me a bit. But as soon as he appeared on Angel I realized that I’d actually missed his character. And I loved that he shared what everyone from Sunnydale was up to. The best part was his weeping, hugging, Lord-of-the-Rings-quoting reaction to Spike being alive. That was really needed. Everyone on Angel either didn’t know Spike before he showed up or didn’t want him alive. Andrew managed to sum up all the feelings of the certain Scoobies who would have loved the news, plus all the fans’ joy at Spike’s return.

Episode 12, “You’re Welcome,” continues the walk down memory lane, this time focusing on the early days of Angel with Cordelia’s reappearance. Again, this was a character I hadn’t been fond of but had grown to like, and having her show up for one episode brought a warm feeling of homecoming.

The episode also addressed Connor’s removal from the memory of Wesley, Fred, Gunn, and Lorne, which had really been bugging me. In a way, it’s the opposite of Dawn’s appearance in Buffy season five. But while the addition of a side character didn’t change past events much in Buffy, the removal of a central character in Angel leaves way too many dangling plot threads. For example, why was Wesley with Lilah? If Connor hadn’t been there, Wesley would have stayed with Team Angel and never gotten all dark and broody. Episode 18, “Origin,” did clear up a bit of the confusion, but that aspect still bothers me.

I really would have hated “The Girl in Question” (episode 20) if I didn’t find out from the comic that it wasn’t even really Buffy in Rome and dating The Immortal. It seemed out of character for her (unless she was getting close to him for a mission). She’s already kind of in love with both Angel and Spike – throwing in an odd character who happens to be the nemesis of both would be way too melodramatic. But it just adds to the hilarity of the episode to find out the whole cover story was Andrew’s idea.

What I’d really like to know is when does Buffy discover Spike’s alive? I’d thought Andrew might have spilled the beans after “Damages,” but since Buffy’s not even in Rome with him it’s unlikely. Giles might have overheard Spike when he was on the phone with Angel in episode 15 – at least, at that point it didn’t seem like Spike or Angel was trying to keep the info secret. And in “The Girl in Question” there is no mention of the fact that Buffy doesn’t know yet, and if she didn’t, wouldn’t Spike still be dealing with the awkwardness of all of it? Maybe the comics have the answer – I’ve only read the first so far.