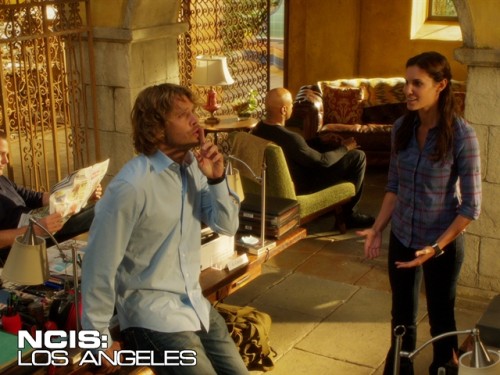 Since I’m a huge fan of NCIS, it was only natural that I’d try out its spin-off show, NCIS: Los Angeles. The two-part “Legend” intro on NCIS held a lot of promise, but an additional nudge toward the show was that it starred Chris O’Donnell. I’d really enjoyed his acting in movies like The Three Musketeers and The Bachelor.

The show got off to a bit of a rough start. Oh, sure, the acting was decent, the plots had plenty of twists, and there were lots of “cool” extras like high-end equipment, action scenes, and undercover gigs. But the chemistry between team members felt awkward and forced, and backstory details seemed invented specifically for each episode instead of building on each other to create full characters.

Now that the show is wrapping up its second season, both individual characters and the team as a whole seem more unified and realistic. And through some casting changes there have been some pleasant surprises, one of whom is the character of Marty Deeks.

Deeks, played by Eric Christian Olsen (who I recognized instantly as Vaughn from Community), entered the show late in season one and eventually became Kensi Blye’s partner. Pairing the two of them up was brilliant. The contrast of strong, confident woman who gets the job done and doesn’t put up with shenanigans with the playful, annoying, yet always has her back guy reminds me of other crime show partners,  most notably Tony and Kate from the early days of NCIS, and Castle and Beckett from Castle.

A few recent episodes underscore how the two of them are growing together as a team. “Personal” showed it in an overt way, with life-threatening obstacles. “The Job,” while containing danger as well, focused more on the underlying emotional stress of the work done, and how partners can and should support each through that.

Oh, and I can’t post about NCIS: LA without mentioning Hetty. She is the heart of the show, and I hope rumors about her being replaced aren’t true. I loved the episode in season one (“Brimstone”) where she quotes The Three Musketeers as the credits begin to roll: “Go home, find a wench, raise fat babies, live a good long life.”