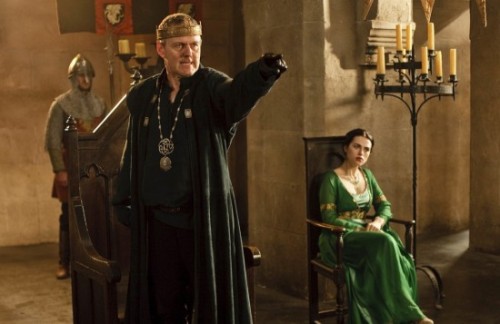 A friend of mine linked to an interview about the upcoming season four of Merlin, which gives a few hints about what’s to come (and mentioned news I hadn’t heard yet – season four will have a full 13-episode run instead of the 10 originally slated). It got me thinking about how much that show influenced my diving into the show Buffy the Vampire Slayer.

For one thing, it made me more comfortable watching a show about magic. I grew up in a house where The Chronicles of Narnia were just barely on the side of good, and videos were stopped or gotten rid of if the magic got too black (sometimes even if it was just the bad guys). I realize everyone has their limits and convictions (and even my parents have gotten less restrictive over the years), but it wasn’t until lately that I discovered how slow I was to try out shows with speculative elements.

Much in the way the first season of Angel and the show Being Human sparked my interest in redemptive stories about vampires (too bad Twilight doused that interest for a time), Merlin showed me how magic could up the stakes of stories since it could be a powerful force for good or evil. Big, scary monsters and spells mixed with comedy and growing up – it worked for Buffy and it’s working for Merlin.

The other push Merlin gave me towards watching Buffy was the actor Anthony Stewart Head (who plays King Uther on Merlin and Giles on BTVS). I still find it hard to believe he’s the only common denominator between the two shows. It’s kind of funny to contrast his anti-magic stance on Merlin with him owning a magic shop and doing spells on Buffy. But on both shows he’s a respected father figure. Giles’ dry wit and exasperated looks are missed, though, as Head has to be a far more stoic king (and almost a villain at times). I’m looking forward to what Merlin’s writers will do with his character in season four, after the traumatic events at the end of season three.

One thought on “Merlin – Magic and Anthony Stewart Head”