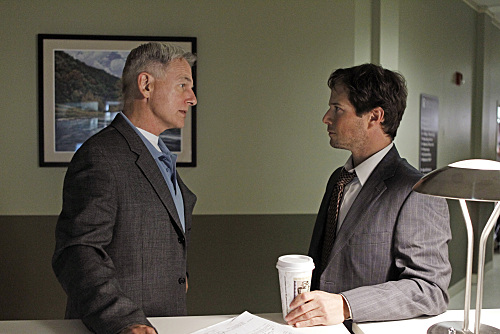 While NCIS didn’t end on much of a cliffhanger last year, it’s one of my favorite shows and I was really looking forward to spending time with the team again. Much like the season 7 opener, season 9 premieres with a Tony DiNozzo-centered episode in which he narrates what has happened over the intervening months.

Castle ended its first episode of the season with Beckett saying, “I remember everything.” NCIS starts off this episode with Tony saying, “I can’t remember any of it.”

Tony was knocked unconscious with a bullet to the vest. His weapon had been discharged twice, and there was blood at the scene, but no body. What was left behind was a bloody NCIS badge that wasn’t Tony’s.

Dr. Rachel Cranston (Kate Todd’s sister) urges him to go back to the beginning and try to put the pieces together, starting with his top-secret assignment from the new Secretary of the Navy. Tony wanted to bring the rest of the team in on the case, but Jarvis refused. Gibbs and the others gradually found out about the assignment, and Gibbs started bothering Jarvis about it and the microchips cut out of the arms of both Levin and Captain Wright. Tony’s assignment also leads him directly to E.J.

In present day, an FBI agent comes to the hospital and tries to talk to Tony. Agent Stratton is played by Scott Wolf, who played Chad Decker on V.

This was one of my favorite lines of the episode:

Tony DiNozzo: Who doesn’t like hot girls who carry guns?

I also loved Gibbs imitating Mike Franks’ voice. It’s nice to know he won’t be forgotten by the team. And Tony quoting three of Gibbs’ rules at Secretary Jarvis was amazing!

While the episode itself was a bit slow, the final twist sets things up nicely for a longer case that should occupy the next half season or more. Looking forward to a “real” episode next week, though!

2 thoughts on “NCIS – Nature of the Beast”