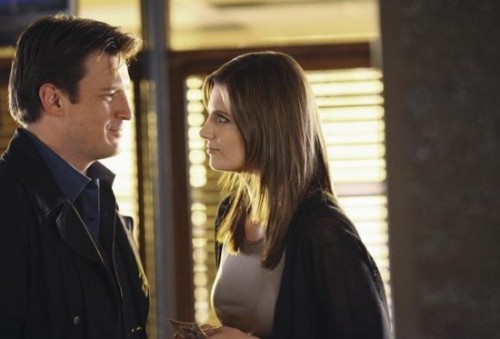 Castle is back! This was definitely one of my top five, if not my most, anticipated season premieres this fall. (Though the Castle makeover my site got may have clued you in, and don’t forget the giveaway! Ten days left.) And I was not disappointed.

Spoilers, as usual, abound in this episode review, so come back later if you haven’t yet seen “Rise”!

Of course we knew Beckett wasn’t dead. The episode opened (after a quick “previously on”) just minutes after the shooting, with Lanie trying to keep Kate alive. In an interesting twist, Josh is the one who has to start operating on her until another doctor gets there. It’s kind of nice that we got a little bit of closure on him before Beckett breaks up with him somewhere in the three-month hiatus.

Yes, after Castle visits Kate in the hospital for two minutes, in which she tells him that she doesn’t remember what happened (including his profession of love) and that she needs space, they don’t talk for three entire months. And while I hate how terrible that was for Castle, I think it was a great move for the episode and this season. It helps the two get back to their camaraderie without negating what Castle told her – it instead tempers it with time and silence. It clues the viewers in that it’s still going to be a while until these characters get together.

The three months gave Ryan and Esposito time to figure out Gates, the new captain, while still making her new to Beckett. I love how they’re sneaking around Gates’ back, and I like the twist that they have to be extra careful that Gates doesn’t investigate Montgomery.

While Beckett recovered, Castle kept himself busy, finishing his book (though less than three months from finishing first draft to published novel is a bit of a fantasy) and helping Ryan and Esposito hunt the killer. I absolutely love how Beckett approaches him at the book signing.

The case in this episode is understandably non-twisty, given that there are far weightier matters to take up screen time. It simply gave us the opportunity to see that Castle’s out-of-the-box thinking is still a valuable asset to the team, and Beckett’s emotional scars are going to take a little longer to heal.

I assumed that Montgomery sent the files to Castle, but instead they went to someone else, as insurance to protect Beckett and the others (too bad they hadn’t arrived before the shooting at the funeral). And now Castle has to keep Beckett from pursuing the case. I love that Castle confided in his mom about it, and how concerned Alexis was for her father, not only with him being in danger physically, but emotionally as well. They were the two who had to pick up his pieces during those three months of silence.

And the final twist of the episode, where Kate admits the truth to her psychiatrist, I definitely saw coming. It was obvious in the way she reacted in the hospital that she remembered Castle’s “I love you.” Now the big question is, when will she tell Castle the truth?