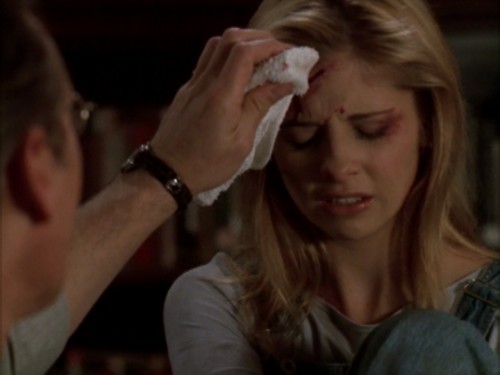 Many shows return or premiere this week, so my blogging schedule should get quite full! I still haven’t decided whether I’ll be keeping up with blogging about Buffy every other post or not, but most likely I’ll take a break for at least a week or two.

“Helpless” is full of the amazing father/daughter moments between Giles and Buffy that I love so much. I hate it that the Council makes Giles betray her for the 18th birthday Cruciamentum test – but it does an excellent job of painting the Council as the bad guys (or at least the out-of-touch authority figure, now that Joyce knows what’s going on and Snyder only has half a season left).

Having already been let down by her real father, who can’t even make it to their traditional birthday date, Buffy turns to the person who has stepped into that role in her life:

Buffy:  You know, it’s usually something that families do together.
Giles:  Now, look very carefully for the tiny flaw at its core.
Buffy:  I-if someone were free, they’d take their daughters or their student… or their Slayer.

Sadly, it’s at that very minute that Giles is drugging her to suppress her Slayer powers for the test. When the insane captive vampire Kralik escapes, it’s Giles who rescues her, and then tells her the truth.

When Kralik takes Joyce, Buffy goes to fight him in her weakened state, and creates a new way to kill a vampire – tricking one into ingesting holy water. Giles arrives just in time to dispatch the second one and start to regain Buffy’s trust.

The episode ends with Giles choosing a side – and Buffy as well:

Quentin:  Congratulations, you passed. You exhibited extraordinary courage and clearheadedness in battle. The Council is very pleased.
Buffy:  Do I get a gold star?
Quentin:  I understand that you’re upset…
Buffy:  You understand nothing. You set that monster loose, and he came after my mother.
Quentin:  You think the test was unfair?
Buffy:  I think you better leave town before I get my strength back.
Quentin:  We’re not in the business of fair, Miss Summers, we’re fighting a war.
Giles:  You’re *waging* a war. She’s fighting it. There is a difference.
Quentin:  Mr. Giles, if you don’t mind…
Giles:  The test is done. We’re finished.
Quentin:  Not quite. She passed. You didn’t. The Slayer is not the only one who must perform in this situation. I’ve recommended to the Council, and they’ve agreed, that you be relieved of your duties as Watcher immediately. You’re fired.
Giles:  On what grounds?
Quentin:  Your affection for your charge has rendered you incapable of clear and impartial judgment. You have a father’s love for the child, and that is useless to the cause. It would be best if you had no further contact with the Slayer.
Giles:  I’m not going anywhere.
Quentin:  No, well, I didn’t expect you would adhere to that. However, if you interfere with the new Watcher, or countermand his authority in any way, you will be dealt with. Are we clear?
Giles:  Oh, we’re very clear.
Quentin:  Congratulations again.
Buffy:  Bite me.
Quentin:  Yes, well, colorful girl.

And that sets up the introduction of Wesley, a character you’re predisposed to hate, but end up loving (especially on Angel).