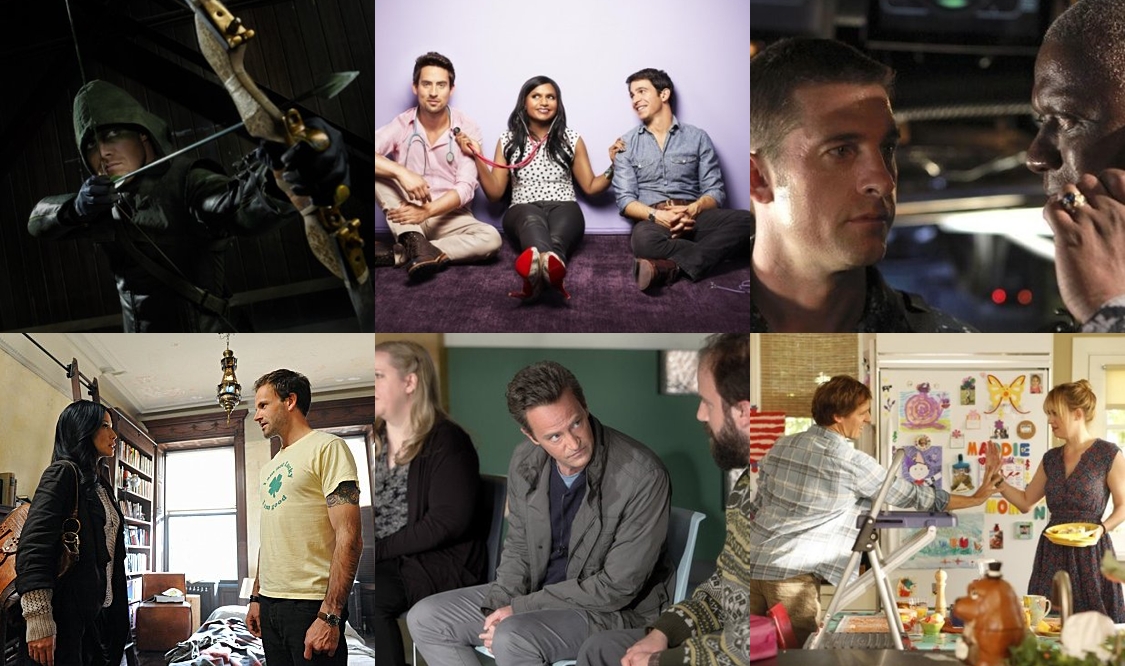 IMDb presents a list of their picks for the top ten new shows – and I agree with just about the entire thing! Each show has a photo and a brief description, followed by thoughts from the site’s editors. I enjoy that they push past all of the hype and nitpicking to give an honest look at how well the pilot episodes work and where they see shows going from there, both good and bad.

Dark Knight, archery division. While I haven’t seen the pilot yet, IMDb puts Stephen Amell’s acting somewhere between Tom Welling’s Superman and Christian Bale’s Batman, which is good enough for me! An awesome superhero show for the fall is needed after enjoying superhero movies and Alphas all summer.

This was a “see if the pilot’s any good” show for me, but since episode one had an unexpected quirky rom-com charm, I plan to stick around for several more episodes. Pairing this with New Girl is brilliant. Here’s my review of the first episode.

One of the few shows I disagree with on this list, mostly since I hate country music and don’t usually like shows that run solely on relational drama (give me murders, spies, bombs, crimes, aliens, cool powers, and other worlds for my drama fix). But if it’s your cup of tea, enjoy away!

The third in my trifecta of most-anticipated new dramas this fall (for the others, see #1 and 2 above). I have a feeling the pilot will be a bit spoiled by the promos, so I’m more looking forward to the second episode. And since Sherlock is already reimagining the traditional Holmes stories, I’m glad this show will focus on new stories. Update: my review of the pilot is here.

A heartwarming little gem that I look forward to seeing more of. See my full review of the pilot here.

I don’t follow many cable shows unless they air on USA, Syfy, or TNT, so I had no idea this cool-looking spy drama from Cinemax even existed. If the pilot shows up online I may have to try it out.

The pilot was great, the second episode a little less so, but I’m definitely giving this show a few more episodes to find its stride. I think the main thing is that the characters don’t feel like family yet, but that usually requires several episodes for most shows. I just hope the writers will be able to find the right balance between humor and pathos as most of the characters deal with pretty significant losses.

One of the other exceptions I’d take off this list – not that it isn’t well made, it’s just not a show I care to watch. I don’t watch many historical shows, unless they’re set in a time and place I love (looking at my list of tags, that’s pretty much medieval England, but there are others). Las Vegas doesn’t interest me at all. Neither does the 60s. I don’t really care about the conflict between a sheriff and a mob boss, and the main cast doesn’t feature any actors of whom I’m a huge fan. So even though I have no other broadcast shows to watch at 10pm on Tuesdays, I won’t be watching (at least this sounds better than Unforgettable, though).

This, along with Beauty and the Beast, was in my second tier of new dramas to try out, so my anticipation level wasn’t as high, but I was still hoping to be pleasantly surprised. I wasn’t. While the pilot had some great moments, very little about it pushes me to watch the next episode. Since it conflicts with Castle, I’ll probably save it to watch online, but I have a feeling this is one of those shows that’ll get put off until I’m so far behind I stop watching. I do plan to watch at least the second episode, to see if it gets better.

For pics, plot descriptions, and IMDb editors’ thoughts on these 10 shows, visit the link below.