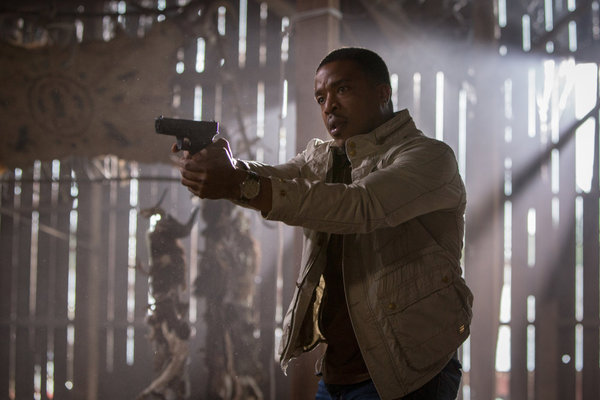 Grimm (and Nick) finally let Hank in on the secret in this episode – Wesen exist. Why Hank can see them is still a mystery, but with Monroe spending more time with Rosalee, it’s nice that Nick has someone else who understands (at least a bit) about what’s going on.

The episode opens with two guest stars, Mark Pellegrino (who I know best as Bishop on Syfy’s Being Human, but he’s reoccurred on Supernatural, Lost, and Dexter) and Maddie Hasson (Willa on The Finder), as father and daughter Jarold and Carly Kemper. When Carly disappears, Jarold turns to his old friend Hank for help. Unbeknownst to Hank, Jarold and Carly are both coyotls, a coyote-like Wesen.

Juliette still can’t remember Nick – and only Nick. Everyone else, from coworkers to Monroe, she still remembers.

Hank is still struggling with seeing Wesen morph right in front of him, even talking to a therapist (which doesn’t go so well).

Carly’s been kidnapped by her uncle Hayden (played by John Pyper-Ferguson, currently reoccurring on Alphas as Stanton Parrish). Once Nick figures out the coyotl connection (with help from Monroe, in a hilarious scene), and their barbaric practice for welcoming females to the pack, finding the uncle is just a matter of connecting dots.

When Nick, Hank, and Jarold get to where the pack is keeping Carly, Hayden tries to play things cool, but after they find her, bullets start flying. Carly freaks out over Nick being a Grimm (how many Grimms kill all Wesen regardless of violent tendencies?), and Hank sees her change. Nick explains that he can see her change, too – Hank’s not crazy.

They save the day, and having Hank knowing what’s going on takes a load off of both detectives. But Nick still has to deal with Juliette not remembering him – and taking her home from the hospital to a house she thinks she lives in by herself is decidedly awkward.

“Bad Moon Rising” is a solid episode that reminded me of early season one episodes, with savage Wesen rituals (remember the bear episode?) and creatures thinking Nick is there to kill them. I’m looking forward to Hank getting more involved in the Wesen world, and I would love for Jarold and Carly to show up again in the future.