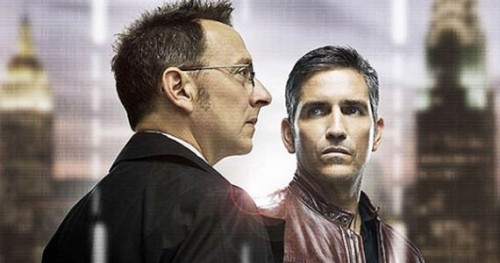 Hearing that Jim Caviezel was starring in this show was enough to make me try it out. The only thing I’ve seen him in before is The Count of Monte Cristo, but his performance helps make that one of my favorite movies. I haven’t seen Lost (tell me, should I add that to the list of shows I must try out? If so, why?), so Michael Emerson’s acting is new to me, and the “rest” of the cast is unfamiliar as well. (I’ll come back to the reason that’s in quotation marks.)

Person of Interest has an intriguing premise: After 9/11, the government had Harold Finch (Emerson) build a machine that could sift through all the data from cell phones, computers, and security cameras to predict future acts of terrorism. Finch found it could predict other premeditated violent crimes, but the government only was interested in crimes involving large numbers of people, so Finch built a back door into the system. The machine periodically sends him the social security number of a person who will be involved in a violent crime.

Finch hires John Reese (Caviezel), a presumed-dead ex-spy, to help him prevent these crimes before they happen. Their job is hampered by the fact that they don’t know whether the “person of interest” is the victim or the perpetrator, or when the crime will occur. A NYPD detective is also trying to track down Reese, though Reese is able to blackmail a dirty cop into helping keep her off his scent.

One of the drawbacks to the show is that I’ve mentioned the entire cast already. Both Finch and Reese are guarded characters who keep their pasts a secret and their emotions locked down 95% of the time. It fits who the characters are, but that makes it hard for the show to connect with its audience on an emotional level. Even though the individual missions tend to be highly emotional (teen girl hiding from her parents’ killer, war vet trying to do right by his dead buddy’s family, kidnapped child), they don’t compel viewers to watch the next episode.

Detective Carter, and the dirty cop Detective Fusco, are only minor characters, but don’t add much emotionally either way. I’m missing the camaraderie, passion, and humor of similar mission-based shows like Leverage and Burn Notice. There’s no funny sidekick or romantic interest (though the latest episode hints at the latter).

Yet in spite of these drawbacks, Person of Interest is still a great show. The episodes keep you guessing, and there have been some fun guest stars, such as Ruben Santiago-Hudson (Captain Montgomery from Castle) and Dan Hedaya (Rookie of the Year, Clueless). Because of the show’s emotional restraint, when the characters do show emotion, it’s vivid and poignant.

Person of Interest has recently been given a full season order, which is nice, since it will now be going up against not only The Office and Grey’s Anatomy, but Bones as well. And if you know me at all, you know what I’ll be watching Thursdays at 9.