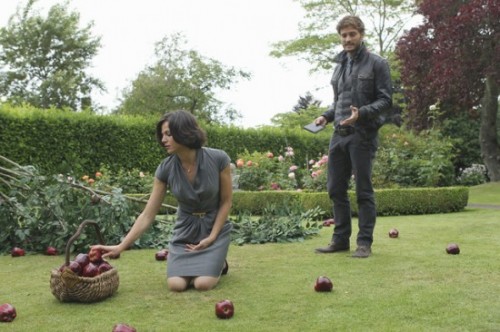 I watched the trailer for this show about a dozen times before the premiere. The premise – fairytale characters trapped in our world with no memory of who they once were – intrigued me, and the visual effects were stunning. I only hoped the show itself would be half as good.

It far, far exceeded my expectations.

Both worlds captured my attention from the start – the fairytale land full of woods and castles and elaborate clothes, and the trapped-in-time town of Storybrooke, Maine, with its quaint touches and secrets. And transitioning between the two wasn’t difficult at all, since both stories progressed in chronological order.

The fairytale story: After Prince Charming awakens Snow White with a kiss, the evil Queen threatens to ruin their happiness. The newly-married and expecting couple visit Rumpelstiltskin in the dungeon to find out more about this threat. In exchange for the baby’s name, he tells them that their daughter will return to save them from the Queen’s curse on her 28th birthday. When the Queen arrives, the Prince has just enough time to hide his baby daughter in the magic tree/wardrobe/portal they’d been preparing so she won’t be frozen in time and trapped like the rest of them.

The contemporary story: Emma Swan (Jennifer Morrison from House) celebrates her 28th birthday with a fake date with a bail jumper (guest appearance from Alphas’ Warren Christie) and a lonely cupcake. But as soon as she makes a wish and blows out the candle, the son she gave up for adoption 10 years ago appears at her door. As she drives Henry back home that evening, he tells her that all the stories in his book of fairy tales are true, and that she’s in the book, too. He says his adoptive mother, the town mayor, is the evil Queen from the story, his teacher is Snow White, and his therapist is Jiminy Cricket. But now that Emma has come to town, she can battle the Queen and free everyone.

The first episode set the bar high as it established both story worlds and the main characters. I absolutely loved the Prince’s swordfight while holding his newborn daughter. And it was fun seeing all the creative touches the real world character had of their fairy tale counterparts: the Queen’s obsession with apples, Jiminy Cricket’s green scarf, Red Riding Hood’s crimson hair streaks.

I wasn’t sure what to expect from the second episode, “The Thing You Love the Most,” but it was nearly as good as the first. Emma begins to learn just how strong the Mayor’s hold is on the town, and to actively work against her after Regina has her framed. Sheriff Graham popped up once again to arrest Emma, and he’s the one character in the show so far whose fairy tale counterpart is a mystery. My friend, Ruth, suggested he may be the Queen’s Huntsman, which I think fits perfectly with the story. I’m looking forward to how his relationship with Emma progresses.

I thought there was a good chance that the pilot was the last we’d see for a while of the fairytale world, but I couldn’t have been happier to be proven wrong. This time it focused on the Queen’s story: what she was up to during the year or so between her threats and her attack, who her allies were, how she got the spell, and what she had to sacrifice to cast it. And it’s not to build sympathy for her character – if anything, she seemed even more evil. Such a twisted and selfish view of happiness.

And Rumpelstiltskin seems a little less of a bad guy in league with the Queen and more of a manipulative man with his own agenda. As Mr. Gold, he doesn’t seem to have forgotten anything about his fairytale life – or at least he remembered enough to have Regina adopt Snow White’s grandson to eventually bring Emma to Storybrooke, and to not trust Regina.

Speaking of Henry, he is a perfect mixture of faith and cunning. It’s amazing that he could have grown up as sweet as he did with Regina. It was interesting to find out the story behind his name in the latest episode.

And I loved that all three characters – Snow White/Mary Margaret, Emma, and Henry – prefer hot chocolate with cinnamon. It looked so good that I made some up for myself! 🙂

(By the way, the winner of the Psych contest has been notified, and I’ll mention the winner when I announce the November contest later this week. Can you guess the theme? 🙂 All November comments will count toward it, so feel free to start!)

4 thoughts on “Once Upon a Time – A Perfect Fairy Tale”