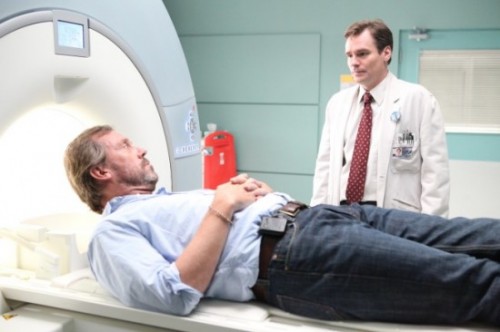 I was waiting for this show to establish the “new normal” before blogging about this season, but I’m getting the feeling that may be several episodes away. House hasn’t had this much upheaval since the end of season three/beginning of season four, when he lost his entire team and had to choose a new one (which took more than a third of the season).

Added to that is the displacement from early season six, only this time House isn’t in a psychiatric hospital, but a prison. There’s also the rift in his friendship with Wilson (a la season five). But the writers did bring something new to the table, though it didn’t originate with them: the departure of Cuddy.

Amazing what driving into a building can do.

The jury’s still out on whether all the upheaval will save this aging show. I really wanted to see the “new” team and how they worked with House before I made a judgment. After hearing about Lisa Edelstein leaving, I was almost positive this would be the last season. Now, I’m not so sure.

I’m mostly discounting the first and third episodes of this season. “Twenty Vicodin” was basically just House being House in prison. Fun to watch, but not a good indicator of the rest of the season. “Charity Case” was a farewell episode for Thirteen, with some bits on how Adams and Park get along (but who knows whether both of them will end up on the team).

Episode two, “Transplant,” showed that this show probably isn’t anywhere near done yet. First was the surprise reveal of the new dean of medicine:

House: Tell the dean that I don’t want to see her.
Guard: He said you’d say that.
House: He?

It was quite a pleasant surprise. I’d assumed they were bringing in someone new, but promoting Foreman seems just as perfect as promoting Andy in The Office. Foreman knows how House works, what tricks he will play, and how to keep him under control while giving him enough leeway to figure out the cases.

Dr. Chi Park is an interesting addition to the show. I loved her in this episode, but I was starting to get a bit of tired of her by the end of her next episode. I think, like some of the more annoying squinterns on Bones (Daisy, anyone?), she’d better in small, infrequent doses than as a regular member of the team. (Oh, and speaking of Bones, they played a new preview for it during the latest House episode. Can’t wait for the new season!)

The “lungs in a box” patient made the episode unusual by itself, and I love how Foreman knew House wouldn’t be able to resist the case.

House’s efforts to repair his relationship with Wilson show how much he has grown over the seasons. Sure, he is still relentless and over the top – his playing “My Heart Will Go On” in Wilson’s office was hilarious – but he was also direct and open about needing to have Wilson in his life. He asked about Wilson’s arm and admitted he was wrong. Their closing scene ended the episode perfectly.