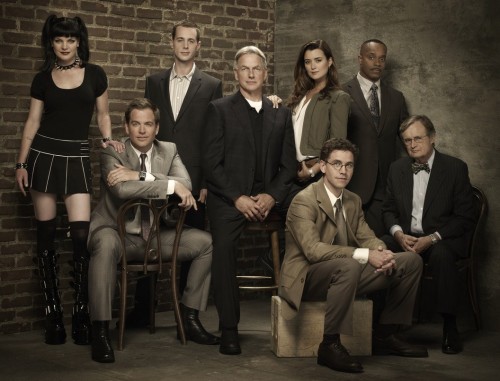 I had no idea what NCIS was when I first did a search for it in January 2009. A friend had it on a short list of favorite shows on Facebook, and I’d never heard of it before (things like that happen when you don’t get any TV channels at your house). Though I prefer to watch shows from the beginning, I didn’t have Netflix then, and Hulu’s options at that point were pretty limited (I tried watching one of the few first seasons they had – My Name is Earl – and could barely make it through each episode). So I watched one of the newly aired episodes of NCIS, “Roadkill,” and fell in love with the show.

Yes, the crimes were interesting to solve, but what I loved most about the show was the team. Charming DiNozzo with his annoying pranks and hidden depth. Probie McGee with his mad computer skills and tenacity. Mysterious Ziva with her killer reflexes and unfamiliarity with American idioms. Wise Ducky with his keen insights and longwinded stories. Energetic Abby with her Goth looks and thirst for Caf-Pow. And the glue who held everyone together – Leroy Jethro Gibbs.

I went looking for more episodes of NCIS. Never have I watched a show more out of order than this one. CBS had all of the currently airing season 6 up on their website, so I continued watching new episodes as well as watching the start of season 6. Youtube had dozens of episodes uploaded, so I found clumps of consecutive episodes and began watching season 4. And season 1. I eventually bought seasons 1-5 and filled in the final missing pieces, finishing every episode by watching the end of season 3 in mid-September 2009, less than one week before season 7 began.

The latest episode of season 8, “Baltimore,” dives into the past for the previously untold story of how Gibbs and DiNozzo met, and how Tony went from being a Baltimore homicide detective to being an NCIS agent. The flashbacks add relevance to the current investigation into the murder of DiNozzo’s old partner.

While the episode had many treasures, from the origins of Tony’s Mighty Mouse stapler to Gibbs giving him his first head slap, and while it also brought to light not just one, but two “new” Gibbs’ rules, one thing didn’t ring quite true. I couldn’t quite see what it was about DiNozzo that caused Gibbs to invite him to NCIS. With Kate, McGee, and Ziva, it was much more clear why Gibbs wanted them on his team. They were gifted. Outstanding. Motivated.

Anthony DiNozzo, however, seems to play the role of everyman and jokester in the show (not unlike the role Xander plays on Buffy the Vampire Slayer, come to think of it). He’s not the “best” at anything – unless you count movie references – and seems to spend a good portion of his time goofing off. Yet he’s unflinchingly loyal, and his unorthodox methods often give results when others fail. As Tony himself puts it in “Truth or Consequences” (season 7, episode 1), “I’m the wildcard. I’m the guy who looks at the reality in front of him and refuses to accept it.”

Yet these things that make DiNozzo such a great member of the team aren’t very evident in the flashbacks of “Baltimore.” You see his unique interrogation style (and it doesn’t show if Gibbs even sees that) and his ability to read people. That void in the story, plus my added anticipation for this episode, meant that it didn’t wow me. It was good, but not one of NCIS’s best episodes (the aforementioned “Truth or Consequences” is one of the best episodes, and a great introduction if you’re new to the show).

On another note, the latest NCIS: Los Angeles episode, “Plan B,” did impress me (to be fair, my expectations for NCIS are much higher than they are for NCIS: LA). Deeks is really starting to overtake Callen as the star of the show. And I sincerely hope the rumors about Hetty not returning for season 3 are false. Hetty is to NCIS: LA what Abby is to NCIS – the heart of the show.

One thought on “NCIS – Baltimore”