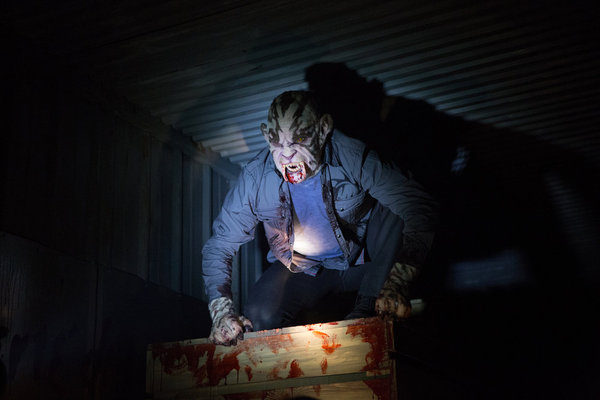 I’ve started reviewing Grimm over on the TV show review site Billie Doux. I’m working on the current second season right now, though I do plan to go back and review season one, too.

Does anyone else absolutely hate the new intro for Grimm? It has a cool visual look, but the voiceover (both content and tone) and music is terrible. It’s a good idea to give new viewers a quick idea of what they’re in for, but did they have to make it sound so 90s?

Grimm is back! The action picks up right where we left off last spring – well, actually 10 days before that. I’m not sure why the intro had to back up and show all the 10 days, yesterday, one hour ago stuff? I think we could have figured it out, though I guess it shows that the cargo container, with its vicious surprise, traveled to Portland from far away. This new kind of Wesen, Mauvais Dentes, is pretty gruesome, truly embracing its saber-tooth-tiger-like side. It’s worth noting that this is one of the few kinds of Wesen on the show that don’t have a German-based name.

And then we’re back to last season’s big end fight between Nick, Kimura, and the woman in black – who we now know is Nick’s not-dead mom, Kelly Burkhardt.

Kelly didn’t kill Kimura like I assumed she did all summer, just drugged him. He didn’t last long beyond that, though. But who killed him right under the nose of the police? Captain Renard seemed content with letting justice take its course. Kelly wanted him alive to get answers. The manner of death looks an awful lot like the reaction to the bee venom in season one – what have the Mellifer been up to since we saw them last? Though in this case, the delivery system for the toxin is different.

David Giuntoli as Nick does a superb job of conveying his emotions in this episode – from the initial shock of finding out his mother’s alive, to the pain and anger at realizing both she and his Aunt Marie let him mourn her for 18 years.

Grimm did a great job of casting Mary Elizabeth Mastrantonio in the role of Kelly Burkhardt. She looks a lot like Aunt Marie and somewhat like Nick. Her warrior-woman stance and abrupt appearances show her decades of training, but also make her seem creepy. What would leaving your child for 18 years do to a person? Especially right after tragically losing a spouse and a good friend?

After a year of getting used to Monroe partnering with a Grimm, it’s  a bit of a shock to remember that other Grimms don’t really see that as a good thing. I loved how hilarious the scene was where Monroe and Rosalee met Kelly, and of course Monroe gets the best lines:

Monroe: Isn’t she supposed to be like not so alive?

Monroe: Family reunions can be brutal. Our last one, we lost two cousins and a sheepdog. Nobody missed the cousins.

I know Nick’s mom is probably on the good side, but I’m not quite ready to hand the coins over to her. She seems sort of an ends-justifies-the-means person, and that usually means individuals pay the cost. Kelly doesn’t have much reason to care about Monroe, Rosalee, Juliette, or Hank, and she let Nick think she was dead for almost two decades, so she’s willing to let him suffer if she thinks it’s for the best. I finally felt a little sympathy for Kelly during the breakfast scene. Come on, couldn’t Nick see that she was trying and take some part of the meal to go?

Oh, yeah, I almost forgot Hank’s still dealing with having seen two Wesen in their true form. He seems to hold it together pretty well during the day, though.

Feds taking over an investigation is a crime show staple, but it gets a cool twist with this show since they are so out of their depth with the Wesen world. Their part of the story is kind of boring, but it’s an effective way to show how dangerous the Mauvais Dentes is without killing off any of the main cast.

The coins have to be taken where they were forged to be destroyed? Oh, how Lord of the Rings of you, Grimm.

James Frain really does a good job at playing so over-the-top-evil they’re hilarious villains (The Cape, True Blood). I’m glad he’s joined the show for at least part of this season. I want to root for Sasha Roiz’s Captain Renard to be the dangerous guy with an honorable streak, but that means we need a real villain in the mix as well. Though Adalind’s mom seems pretty evil as well:

Nick: She says she doesn’t know where Adalind is.
Kelly: Did you threaten to kill her?
Nick: Yeah, of course.
Kelly: Want me to take a crack at her?

I just love the Grimm-style mother/son bonding of that scene. As well as how impressed Kelly is that Nick was behind the delivery of the three Reaper heads.

This episode ends on a cliffhanger just as the Mauvais Dentes, having lured Nick in with the two FBI agents, leaps to attack. A promising start for the new season.