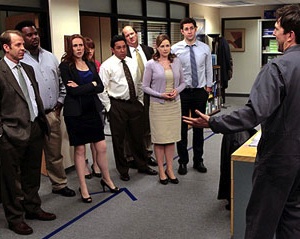 Well, it’s official – this coming season of The Office will be its last. I’d pretty much given up on the show, but since I’ve stuck around this long, I may see it through to the end. Making the character of Nellie Bertram (who I hated) a regular on the show made me write the show off, but I hear that next season Andy will be tormenting her for what she put him through last season, and be trying to get her to quit. It might be okay if she’s sort of the villain of the office instead of the show trying to get us to feel sympathy for such an unlikeable character.

The final season will bring back some familiar faces (Roy is already scheduled to appear early in the season) and offer a look into the documentary crew who’s been filming all these years. We may not say goodbye to all the characters, though, as the Dwight spin-off The Farm is still very much a possibility.