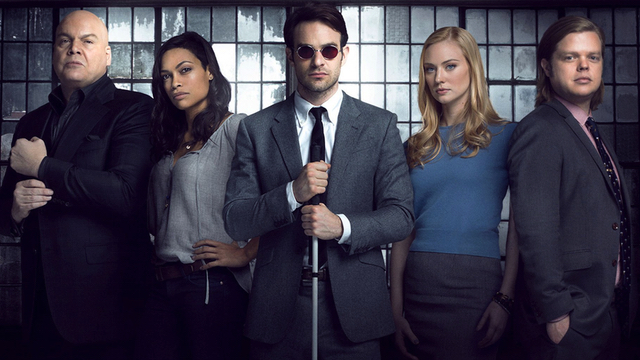 I finally caught up on Marvel’s Daredevil, a show I’ve been aching to finish for months (my sister didn’t really connect with the characters and we were watching together). By turns I loved it, I hated it, I was amazed by it, I was bored by it, and ultimately, I cannot wait to see what happens in season two.

In case you’ve been living under a rock or tend to block out all superhero news (this show is more crime/vigilante noir than a standard superhero tale), here’s a brief summary: Matt Murdock was blinded as a child, but the accident enhanced his other senses. By day, he’s a lawyer fighting injustice with his best friend Foggy Nelson and their first client/new assistant Karen. By night, he keeps the streets of Hell’s Kitchen safe by beating up criminals and rescuing victims. But the mysterious head of a group of organized criminals, Fisk, has a different plan for Hell’s Kitchen.

Being as I’m a pessimist, I’m going to nitpick about the things I disliked first before I gush about all the things I loved. Spoilers for the full first season below!

The gore. While I really liked the way the show made you feel every blow Matt took, there were way too many bits that were over the top. At least most were telegraphed well enough so I could look away. Still, it’s annoying to have to add a warning to friends every time I mention the show.

The subtitles. I get that they’re trying to show how diverse New York City is. And it’s great that they include a bunch of different nationalities as part of the show. But I hate subtitles with a passion. One thing I love about conversations in TV shows is getting to see the emotions on characters’ faces as they talk, but with having to read the subtitles (since I don’t speak Russian, Chinese, Japanese, or Spanish), my eyes are constantly darting from words to faces and it pulls me out of the story.  Side note: A similar thing happens when the closed captioning is turned on, one reason I also hate that. I can’t ignore the words since I communicate best with printed words so my eyes are naturally drawn to them. But since I read so quickly, I also generally read the words before the character says, which often strips conversations of emotional impact and humor (like a person blurting out the punch line of a joke too early).

The under use of the “world on fire” view. I get that they don’t want Matt’s enhanced sense-informed “sight” to be a gimmick, but there were several times it should have been used. Most notably when Matt was trying to meditate but kept remembering the Nobu and Fisk fight. If they are his memories, they should be the way he sees them, not the way the camera did (which we already saw the first time).

The slow build. While a 13-episode season has more breathing room than a 2-hour movie, I fear the measured pace failed to capture many viewers. I myself was always going to watch the show because Marvel, but even I wasn’t completely hooked until episode 4.

The predicable end. I foresaw many of the twists in the final few episodes. Leland being behind the poisoning. Ben dying. Fisk escaping. Daredevil beating him in his shiny new suit (which just seems off for some reason, but could have been much worse). The three friends coming back together felt awkward, as did their scene together outside their office. The opera music over the arrests was annoying and didn’t mesh with the scenes – I feel like it would have felt more powerful if a different selection had been used, even a different opera selection. I also think it would have been an interesting twist to have Fisk go after Ben’s wife instead of Ben himself (not to mention that we would still have Ben for season two!).

Now for the stuff I loved!

Matt Murdock. Charlie Cox was the perfect choice for this role. I was most familiar with his acting from his lead role in Stardust (one of my favorite fantasy movies), and his talents have only grown. He does an amazing job of helping viewers feel everything that Matt feels – every blaze of pain, every glimmer of hope, every moment of panic. When he is let down (again) by Stick, when he has to admit his lies and secrets to Foggy, you ache with him. And I’m not ashamed to admit I now have a bit of a crush on him! (Sorry, Thor/Chris Hemsworth, you’ve been downgraded.)

The rest of the casting choices. Elden Henson as Foggy played off Matt’s serious demeanor expertly, bringing a much-needed ray of lightheartedness, but also had plenty of serious character moments (I loved when he told off his ex!). Vincent D’Onofrio transformed completely as Fisk (especially contrasted with his character on Jurassic World) and made you want to give the villain a happy ending (well, until the first head rolled at least). Rosario Dawson, Deborah Ann Woll, Toby Leonard Moore, Vondie Curtis-Hall – the list goes on.

The religious debates. God and superheroes don’t normally mix (aside from Captain America’s brief mentions). If anything, it’s the villains who tend to be religious fanatics who twist scripture and abuse faith toward their own ends. Having the hero be a strong Catholic trying to come to terms with what he believes and what he feels he has to do adds much to the story.

The law practice. I like that the day jobs aren’t completely forgotten or nonexistent in this superhero story. While the job does get pushed aside at times, their limited client list makes this acceptable. (What happens if they get busy next season? Matt is never going to sleep.)

The limited scope. Matt isn’t trying to save the galaxy, or the world, or the country. He’s trying to save one victim at a time, or at most, one neighborhood in New York City. That, along with Matt’s not-as-flashy powers, gives the show a much more grounded, human feel.

The humor. While this is a very serious show, the humor that is there is often in the wry sense that I like. Hopefully next season has more hilarious moments as the trio of friends becomes more comfortable with each other.

The lack of a singular love interest. While Fisk beats a speedy path from first conversation to proposal with Vanessa, the rest of the romantic relationships are left very much in flux. Yet there is no overt love triangle or meant-to-be couple (in the show itself, I haven’t read the comics). It’s a refreshing change and one well suited to a show that should last for years.

The action sequences. I don’t know much about the technical aspects, so I’ll just say they were amazing.

Have you watched Daredevil? What do you think about the show?