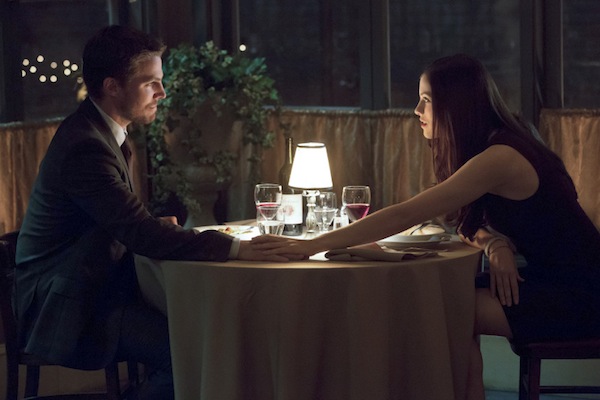 After a week without Arrow, it was great having the show back, though the previews and sneak peaks and rumors did build “Muse of Fire” up a little too much in my mind. I loved the episode, though, and it included some great reveals and character moments, as well as awesome fighting scenes. Plus this week, apart from the intro, there were no flashbacks to the island (if memory serves me right, this is the first episode without them).

That omission gave the episode extra time to introduce a new character and love interest for Arrow. The Huntress was announced early this fall, and finding out her backstory (mob boss’s daughter trying to take down the organization) nullified any surprise reveals. I did like that she was the one informing on her dad to the FBI, not her fiance, who the dad had killed for the crime – at least she tried to take down her dad through proper channels before resorting to being a vigilante.

Her current methods leave something to be desired, especially since her aim isn’t that great. Shooting a guy in broad daylight and almost killing Oliver’s mom? Not good. I’m surprised Oliver seemed to forget all about that once he realized the shooter was Helena (I wonder how long it will take before I don’t think of H.G. Wells from Warehouse 13 every time I hear her name?), but I can see how he’d want someone to be himself with. Yeah, he has Diggle, but most of the time Dig disapproves of every move Oliver makes (I keep wanting to call him “Judge-y,” like Damon does Bonnie in The Vampire Diaries). Helena seems to lead too far in the other direction, but maybe she’ll wake Oliver up to his own moral values – if she doesn’t pull him down along with her.

I really enjoyed Tommy’s story this episode. Arriving at the same time as the pizza guy was great. I also liked him telling Oliver about going on a date with Laurel (and thankfully they didn’t do that cliche both-couples-end-up-at-same-restaurant thing) and Oliver’s response: “If you hurt her, I will snap your neck.” Pause. “Just kidding.” And Tommy saying he wished he could start over again with Laurel was sweet. I like the two of them together. I’m guessing Oliver and Laurel will eventually end up together, but I imagine that’s many seasons down the road.

And then there was the big reveal of the episode: John Barrowman’s mysteriously evil guy is none other than – Tommy’s father! I did not see that coming, though I did recognize his voice before he took his fencing mask off. No wonder he had no qualms about coming right into the Queen house and letting Thea see him – their families have been friends for decades. Now I can only hope that the senior Merlyn is enough of a bad guy to be the comic book villain, while Tommy can be more of a redeemable character.

Thea is still being a very uneven character. I loved her telling Oliver about his lunch plans and him teasing her for being like their mother. But her anger at him for leaving Moira after the shooting to chase down the shooter felt forced. Yeah, it’s not what Thea would have done, but she should have understood her brother’s need to catch the person who did it. It did lead to a nice mother-daughter talk, and Thea apologized to Oliver later. I just wish Thea would settle on a role toward Oliver, staunch supporter or disappointed sister. Maybe the writers are figuring that the drugs and alcohol have given her violent mood swings?

This episode also showed Moira in a better light – more soft and vulnerable. Mr. Merlyn coming into her room like that when she was hurt was creepy. I’m so glad Walter’s back, though. And does that mean we’ll see more Felicity? I hope so.

We did get one unexpected visit from a reoccurring character this week – China White! Sounds like a war is brewing between the mob and the Triads. And Laurel’s dad visited Oliver to begrudgingly warn him about Helena – though if I were him, I’d still be a little suspicious about Oliver being at the same place where Arrow fought not much later. I felt bad for the restaurant owners – they seemed like a sweet couple – and I was glad both Arrow and the Huntress showed up to defend them (though of course, they got a little too preoccupied with fighting each other instead).

And Tahmoh Penikett was on this episode! Though he really needs to find a gig where he isn’t the villain, getting killed off within an episode or two. He was awesome as Paul Ballard on Dollhouse.

Oh, and bonus points? This episode exactly matched the 18-49 ratings from the premiere! I love that the viewership for this show is so solid – hopefully it will be around for many seasons!

One thought on “Arrow – Muse of Fire”