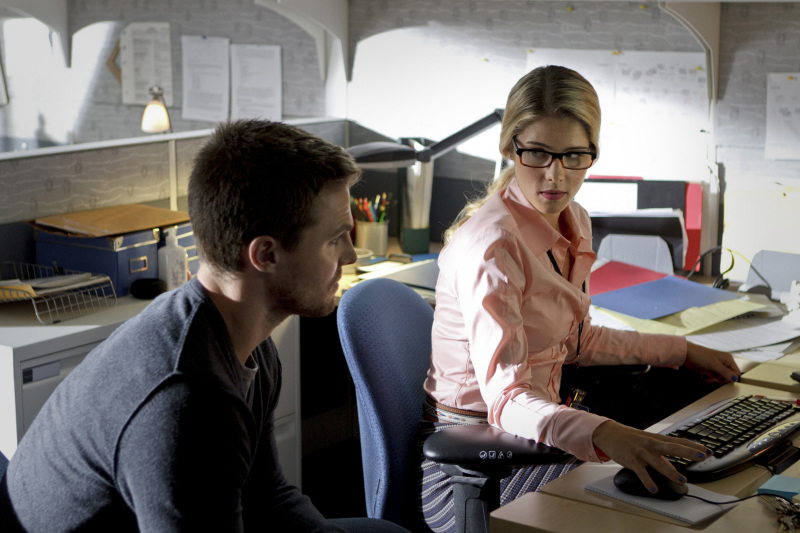 I’ll admit, I braced myself a bit for this episode. Arrow couldn’t keep being this awesome three weeks a row, right? Wrong. This episode was just as good as the first two, and maybe even a little better. One distinctive way the show is improving: the voiceover didn’t annoy me. Not once.

In addition to our villain of the week, Deadshot, we get a new reoccurring character, Felicity Smoak (pictured above), played by Emily Bett Rickards. She’s an IT whiz whom IMDb says will be in at least 4 more episodes this year. Smart, funny, and a compulsive babbler? I approve.

Deadshot is a methodical sniper who poisons his bullets and tattoos the names of his victims onto his body. We get a glimpse of the name “Andrew Diggle” on his body and find out later in the episode that Dig’s brother is dead. Doubt that’s a coincidence. Also, that makes him less likely to be a one-episode villain, so did Oliver’s arrow actually kill him? We saw it go through his monocle-like scope, but could that have slowed the arrow down enough so it only would destroy his eye, not kill him?

Okay, Thea spilling the beans about Tommy and Laurel to get back at Oliver was not cool. And she didn’t even apologize later (was she so wasted she didn’t remember?)! And right after that sucker punch, Oliver comes across the club owner (who hates him) and gets actually punched. I love that Tommy stood up to the bouncers in defense of Oliver even though he knew he didn’t stand a chance. And Laurel coming to their rescue with her “self-defense class” moves (yeah, right) was priceless. I also liked how she knew Oliver well enough to figure out he already knew about her and Tommy. Much as I like Oliver and Laurel together, in this episode I preferred the Laurel/Tommy pairing.

We get some more island flashbacks in this episode, where the hooded man who shot Oliver cares for him and insists he only shot him to save him. Oliver isn’t buying that, of course, and runs when he gets the opportunity, only to be caught in a trap. The hooded man cuts him down, and later we see heavily-armed men checking out the trap. So far, aside from Oliver’s rescue off the island, the flashback clips seem to be relatively chronological – I’m wondering if that will continue.

I think Oliver’s idea to build a club over his lair is the perfect cover – but he’d better make it really hard to get into the basement. Because anyone who sees blueprints for the building is going to know there is a basement down there. I also loved that Quentin Lance actually took Arrow’s advice about Deadshot’s planned attack. Yes, it made sense that other auction bidders would be targeted, but hopefully it’s a step in the right direction toward a begrudging partnership between the detective and the vigilante.

And wow, the ending! Dig runs after Oliver (after seeing his mom and little sister to safety as requested), only to get hit by a stray bullet as the archer and hit man fight. Arrow takes him back to his lair to get the herbs that he’d already used as an antidote when he’d been the one struck by a poisoned bullet early in the episode. When Diggle wakes up, Oliver is standing there in full Arrow gear, sans hood. He greets his bodyguard with a simple, “Hey,” and the episode ends.

While it’s surprising that Oliver revealed his vigilante alter-ego so early in the show, I think it’s more of a testament to Dig’s skills and keen eye. Oliver wasn’t going to be able to keep his secret for much longer with how well Dig did his job. So rather than make Dig seem unintelligent, the writers have set things up for him to be a valuable ally.